Another invitation-only stress test is scheduled for this weekend on PC.

For those who haven’t been able to get into the closed beta for Blizzard Entertainment’s Overwatch, take note: The developer will be opening up the beta this weekend for PC players to “help get server hardware and technology ready for release”.

Over on Battle.net, Blizzard said that, “To help us get the most out of this testing phase, we will be flagging accounts for the Beta Test Weekend beginning in the afternoon Pacific Time on Thursday, April 14. Once flagged, we encourage all new recruits to download and install the beta client so you can be ready for action once the stress test officially begins.

“If you’re selected to participate in this Beta Test Weekend, you’ll see an Install button appear in the Overwatch tab of your Battle.net desktop app as well as an Overwatch Beta license in the ‘Your Game Accounts’ section of Battle.net Account Management.”

The beta will conclude on April 16th at 9 PM PDT. As noted above, this is a stress test of sorts and doesn’t seem to indicate continued access to the closed beta that current participants have. Nonetheless, if you’re itching for some Overwatch, it’s the best bet you’ve got right now.

You could also wait until May 5th when the open beta begins (May 3rd for those who pre-order) or May 24th when Overwatch is out on PS4, Xbox One and PC. 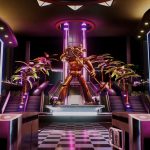 Players will need to survive a night against Roxy, Chica and Monty along with other threats but receive help f...

The Isle of BIGsnax is an appropriately named "big" expansion and will be coming as a free update sometime in ...

Supertrick Games and GungHo Online Entertainment have announced a new melee-focused PvP survival game, due out...