Various balance changes have also been made to the RAH-68 Huron, YG-99 Hannibal 30mm Cannon and the BSV-M's Full Auto and High Power Rounds.

The sequel to the 1997 cult-classic RPG is out on August 26th for consoles and PC. Here's everything you need to know about its story, combat, and cast.

Jumping into the asymmetrical PvEvP horror title for the first time? Check out all of the playable Survivors and Kandarian Demons here.

Learn more about Arrow, Saizo and Milady, and how they each experienced betrayal en route to the RPG's release on August 26th.

Set after the prologue, the 16-minute video sees the hero breaking into Gotham University in search of Dr Kirk Langstrom. 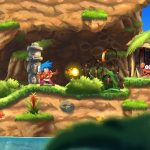