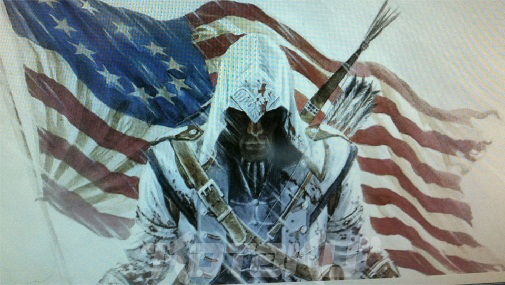 Rumours surrounding the Assassin’s Creed franchise, especially the third instalment of the series, have been raging recently, and now we’ve got more. A Best Buy employee has sent Kotaku two images snapped from their news section (pictured above and bel0w). The employee says that an announcement regarding the game will be made on March 5- probably what Ubisoft was hinting at yesterday– and that pre-ordering the game will grant you special bonuses.

However, what’s interesting is that the promotional art that the Best Buy employee has captured for the game shows what is possibly the protagonist of Assassin’s Creed 3. The original Continental flag can be seen waving in the backdrop, pretty much confirming the American Revolution setting that has been hinted at time and again for AC3. 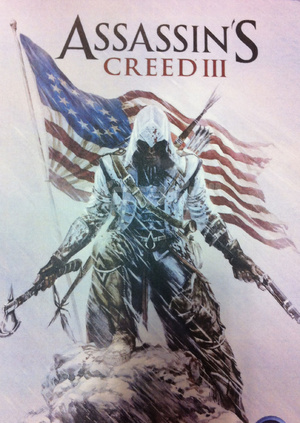 The main character, Kotaku notes, is probably native American, judging his weapons and jewellery. He also seems to be wearing an 18th-century military jacket. Kotaku’s source also tells them that the Assassin is also holding a tomahawk out of the shot.

However, remember that this still isn’t official, so take all this with a pinch of salt.

Recently, Ubisoft announced that Assassin’s Creed 3 will be releasing this year in October, and said earlier that it was going to be the biggest game in the series. Whether that is true remains to be seen.

We will keep you updated, so stay tuned.