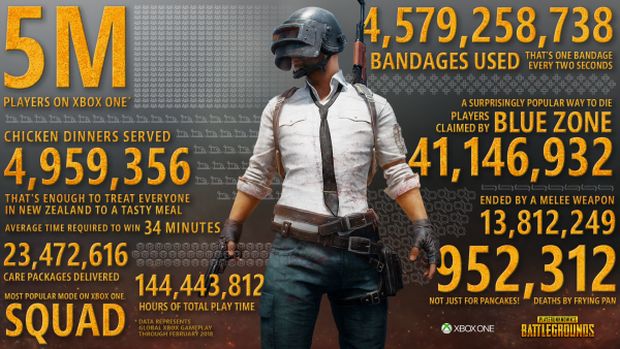 Fortnite: Battle Royale may be touted as the student surpassing the master but PlayerUnknown’s Battlegrounds still has a fairly strong following. On Xbox One, the title has already passed five million players. Having released in late December, that’s a fairly strong feat and all players will be receiving a free PUBG5 jacket to celebrate. You’ll need a character in the game by March 22nd, 12:01 AM PST to claim the reward.

PUBG Corp has also released a number of different stats for Xbox One players including over 4.9 chicken dinners; the average time required to win being 34 minutes; more than 952,000 deaths via frying pan; 23.5 million care packages dropped; and 41 million deaths in the Blue Zone.

Both PlayerUnknown’s Battlegrounds and Fortnite: Battle Royale will be looking to expand in the mobile space next. The former is already available in the West and invites for the latter are already being sent out on iOS.