The Vita has a whopping 900K units in the US alone.

Consider the problems that Sony has had in the past year with their handheld, the Playstation Vita. Not only was there an issue with price, but there just didn’t seem to be enough worthwhile games. Terrible efforts like Call of Duty: Black Ops Declassified did nothing to help this impression either. 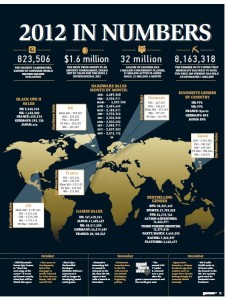 Which is surprising when you check out the latest data from UK magazine gamesTM, which covers sales for the handheld in the past 11 months, the results are actually a bit surprising: The PS Vita’s biggest market is in the United States with 900,001 units. Japan comes in second with 536,846 units while the UK, France and Germany make up the remaining top 5 with 238, 429 units, 218, 787 units and 143, 995 units respectively. Sure those aren’t the greatest numbers but what could possibly explain the US being so far ahead of Japan in unit sales? Especially when it was Japan that made the PSP such a success?

Maybe it has to do with the support and games geared to the audiences. Combine this with the US’s higher spending rate compared to other Western countries and that could be the answer. It’s not going to pull Sony out of hot water with the Vita any time soon but it must be very uplifting for them.