Plus a few interesting details regarding The Deep revealed.

Project Morpheus is now out in the open, and as a VR headset that will support PS4, PS Eye and PS Move, it’s been garnering some positive feedback.

Indie developer David Klingler has tweeted out some of his observations regarding the device. “So the resolution is not an issue for Morpheus. The depth is good, comfort is good…Not best tracking, but can be fixed I think.”

He also stated that, “…I’m definitely looking forward to developing for Morpheus.”

Most importantly, Klingler noted that, “Morpheus did not feel the same as Oculus. I mean that in more than one way. The only thing I would have liked more besides tracking is that the sound was too quiet so I could not hear the nuances of the sound work done by Sony.

Klingler also had a chance to try out The Deep. “The first demo I played was The Deep. I was inside a cage going underwater and got attacked by a shark.

Klingler noted that, “demos looked impressive graphically and the depth was very well done. Bubbles close and wreckage far away in The Deep.”

But there are a few downsides as well: “The current downsides for Sony to work through: tracking, quicker resetting of calibration, and perhaps the sound. ”

As for The Deep, it seems that Sony handed out guides to the game, describing the overall premise and gameplay courtesy of Ubisoft Montreal’s Damien Kieken. 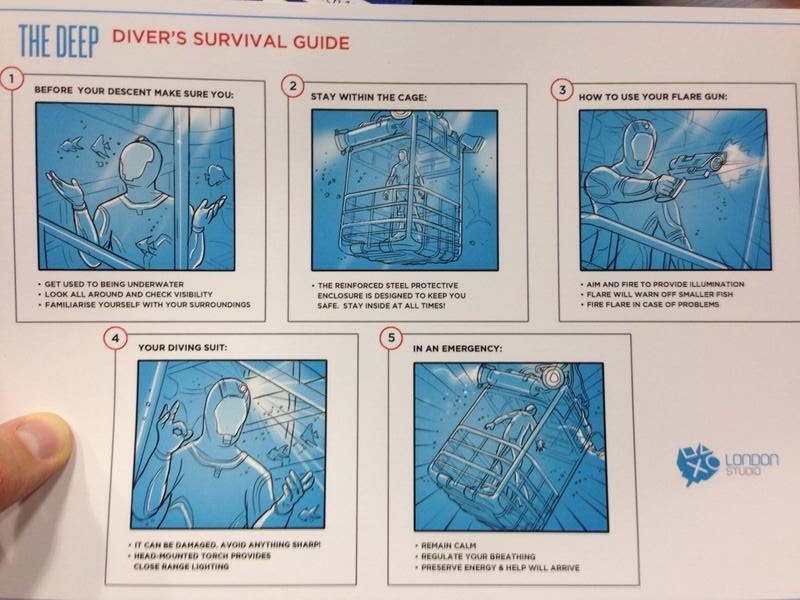 The Deep has you donning a diving suit and struggling to survive inside of a protective cage. Sharks are attacking but there seem to be other fish in cahoots. The head-mounted torch described in the image hints at what the PS Move-mounted headsets could be used for.

What are your thoughts on Project Morpheus thus far? Let us know in the comments.