The RYNO 8 can tear open dimensional rifts, dropping objects from other dimensions on top of unsuspecting foes- and some of these objects are quite familiar... 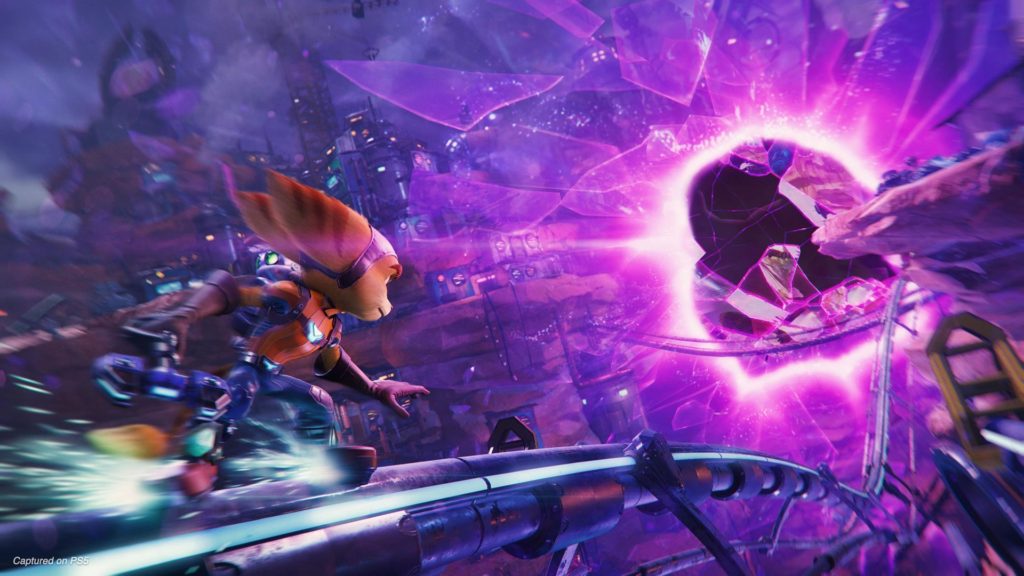 Ratchet and Clank: Rift Apart is right around the corner, and developer Insomniac is driving up the hype with a bunch of tweets showcasing gameplay snippets and revealing new details for the highly anticipated action platformer. And there’s quite a bit to sink your teeth into here.

The most significant thing here is the new weapon, the RYNO 8. This weapon tears up rifts in the sky, which drop objects sucked in from other dimensions on unsuspecting foes. While plenty of the times you’ll be hitting enemies with debris or explosive boxes, some times, you’ll pull in familiar things that’ll cross over from other PlayStation franchises. In the brief gameplay snippet Insomniac posted on Twitter, the one thing you can see right at the end is a Thunderjaw from Horizon Zero Dawn. Interestingly enough, across several teases, in addition to Horizon, Insomniac also seems to be teasing crossovers from Uncharted 4, Sly Cooper, and Sunset Overdrive.

Meanwhile, additional gameplay tweets also provide brief glimpses of other things, such as the Hoverboots, which provide a fast-paced means of traversal. Another tweet shows the returning Buzz Blades in action, while Insomniac also introduces Zurkie’s, a Resistance base that will serve as “your home away from home.” Finally, the game’s 3D audio support is also shown off. Check it all out below.

Ratchet and Clank: Rift Apart launches exclusively for PS5 on June 11. Recently, it was confirmed that the game’s day one patch will add 60 FPS and 60 FPS + Ray Tracing modes to the game. Get more details on that through here.

Ratchet: We made it outta the rift with a new super weapon: the RYNO 8!

Rivet: Welcome to Zurkie’s. Your home away from home—and, more importantly, away from Dr. Nefarious’s goons.
We’re here in this Resistance hangout to pick up some new weapons courtesy of the Zurkon family. #RatchetPS5Takeover pic.twitter.com/gPZGEazTwb

Clank: Ahem, due to the 3D audio capabilities of the PS5 console, I am able to hear the sounds of Zurkie's, below and beside me, using compatible headphones. It is very impressive technology. 🔊 #RatchetPS5Takeover pic.twitter.com/8A6LubYiQ8

Rivet: Buzz Blades! Good call. Nothing like bouncing blades of destruction to shave these guys down to size.#RatchetPS5Takeover pic.twitter.com/P30vrSuylo