Resident Evil 3 is Capcom’s second attempt to bring the classic-era Resident Evil titles to a new audience. Twenty years have passed, but looking at the critical reception, the Resident Evil 3 remake will likely end up as underrated as its spiritual predecessor. While gameplay and environments might mark a bit of a step back from the spectacular Resident Evil 2 remake, Capcom has put considerable effort into making the franchise’s latest iteration look great on current-gen platforms.

As the current console generation winds up, Resident Evil 3 is one of the last big AAA to exclusively arrive on eighth-gen platforms. While the game itself hasn’t received critical acclaim, from a technical perspective, this is a very accomplished title using toolsets Capcom’s had an entire generation to perfect. Let’s take a deep dive and find out what makes Resident Evil 3 tick.

PC vs PS4 Pro vs Xbox One X Comparison, Performance and Resolution Parameters

Let’s begin with the best version, which is undoubtedly the PC version. The PC version is packed with a ton of graphical options including but not limited to Image quality, Shadow Cache, Shadow Quality, Particle and Lighting quality, Texture quality and Texture filtering. The UI also shows an indication of how much memory is being used and the kind of effect each graphical option has. Resident Evil 3 on everything maxed out on the PC is a looker and we had next to no issues running this game at a rock solid 60fps.

Now, let’s talk about the console versions but before we proceed ahead we wanted to make a note. On the console front, we analyzed the game’s performance by taking some sample scenes from the game and running it through trdrop, an open source software. Note that this tool gives us a mere demonstration of the game’s performance, because an exact 1:1 representation of performance can only be provided by the developers themselves since they have access to vast of array of tools and profilers. Also note that this analysis only considers the campaign mode.

While Resident Evil 3 looks great on the two enhanced consoles, performance and the overall experience are surprisingly different on the Xbox One X and PlayStation 4 Pro. Both of the top-end console versions make use of checkerboard rendering. This means that we’re not getting a full native output. Up close, checkerboarding artifacts are evident, especially on transparencies such on fences. The big differences here, though, are in terms of output resolution and overall performance.

This leads to an unusual situation where the PlayStation 4 Pro actually delivers the best overall console experience, with framerates in the 50-60 FPS range. We do take issue with Capcom’s decisions to fully unlock the framerate on console. The Xbox One X version in particular suffers from serious dips from scene to scene that have a tangible impact on responsiveness. Even the 50-60 FPS output on the PlayStation 4 Pro is inconsistent and stutter-prone. Capcom really should have dropped the resolution to 1800p checkerboarded on the Xbox One X. It’ll be interesting to see if they offer this option in a future patch to address performance issues. 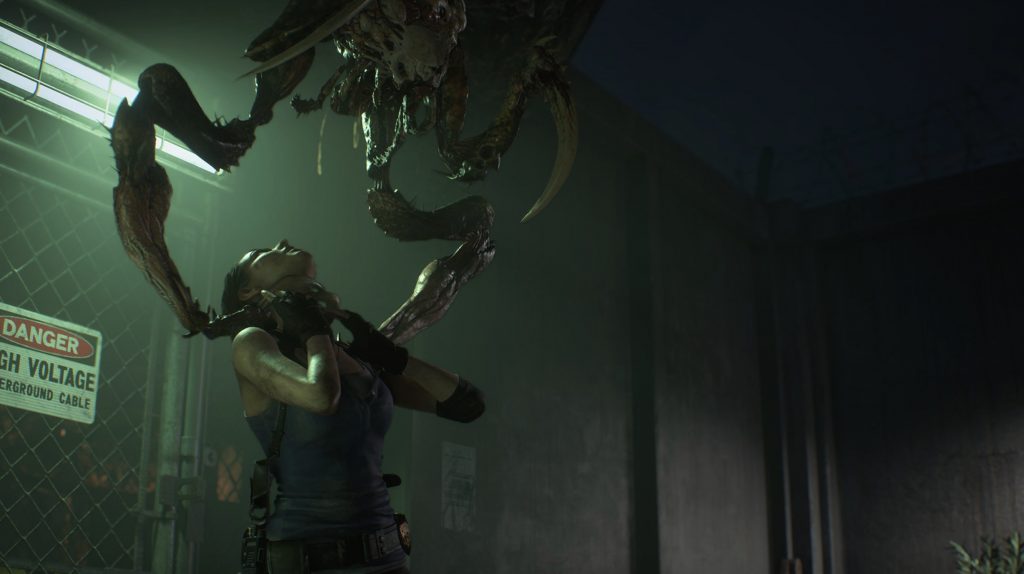 The effect is particularly pronounced in Raccoon City exteriors where emissive neon lights bathe the environment and characters in a number of different colors. Particle effects like barrel explosions also emit lit. For performance reasons, though, the number of shadow casting lights is quite limited. Jill’s flashlight, however, casts shadows on objects, as well as number of point-light sources. The RE engine in Resident Evil 3 utilizes a physically based material rendering pipeline. This is something we saw in Resident Evil 2 and Capcom’s artists have continued their excellent material work here.

Surfaces like asphalt, cloth, and metal are rendered physically correctly. The move to a deferred renderer has also had an impact on how anti-aliasing is handled. Instead of the MSAA used in MT Framework titles, RE Engin in Resident Evil 3 goes for post-process temporal AA solution. It does a great job with covering aliasing, but introduces a significant amount of blur in the process. PC owners have the option to deploy post-process sharpening tools but console owners, particularly those on the PS4 Pro with its 1620p ouput, will have to put up with sub-par image quality. 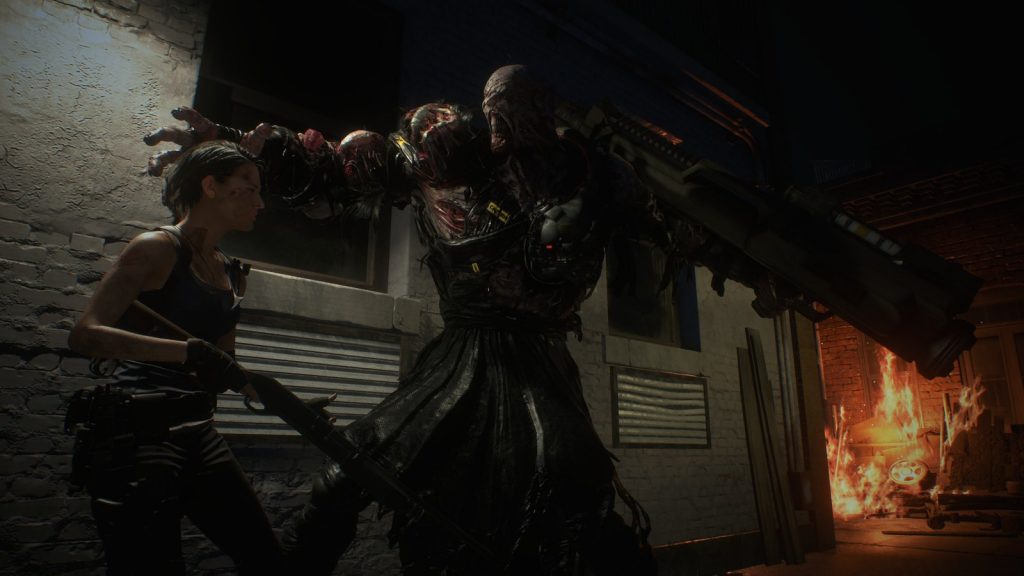 The original Resident Evil 3 delivered excellent character models for the time. It did so on fifth-gen console hardware by using pre-rendered environments, allowing the developer to allocate the entire polygon budget to the models themselves. In the eighth-gen, this is no longer an issue.

Character models for main characters like Jill, Carlos, and of course, the Nemesis, have very high poly counts in the mid-five digits. High frequency details likle the rivets on Jill’s satchels and holster are fully modeled. Animated polygonal hair is also deployed. The temporal AA solution smooths over the hair for a surprisingly clean presentation.

This is especially important in an early-game chase scene with the Nemesis in hot pursuit. In certain exterior areas, such as outside the Moon Donut store, it’s evident that Capcom’s implemented generous LOD scaline. This minimizes pop-in, even on the base consoles leading to a very consistent experience. While not open world in any respect, the RE Engine handles Resident Evil 3’s wider outdoor environments with ease, and looks great while doing so. 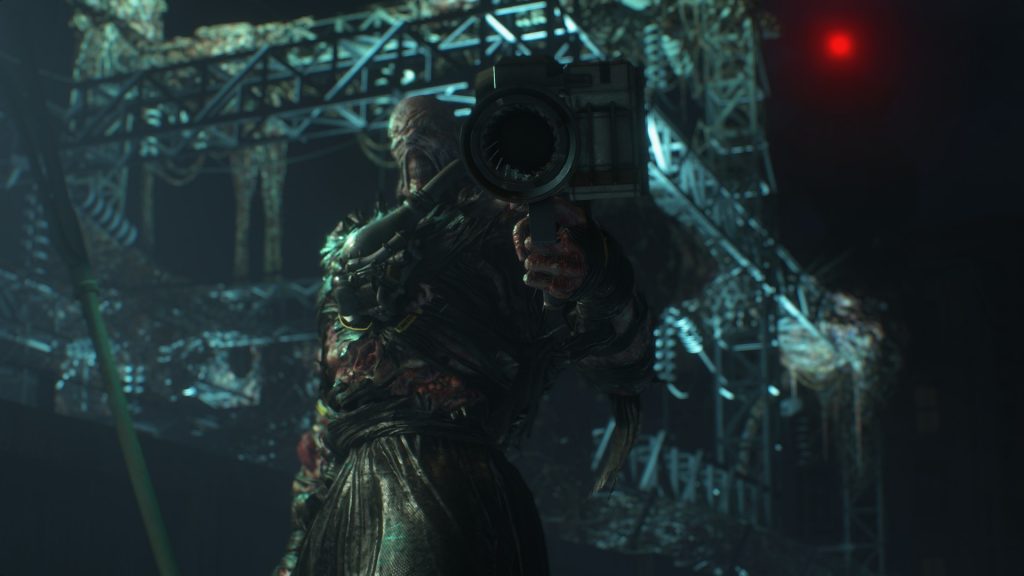 The move to a deferred renderer with the RE Engine has proved to be a major boon when it comes to Resident Evil 3’s particle rendering. Alpha effects such as the fire from barrel explosions appear to be rendered at full res, even on consoles. Volumetric effects like fog and the high quality dust effect in the subway train create an illusion of depth, even if they aren’t actually lit by other light sources. Many particle effects in the game, from gunshots to explosions emit light, but don’t actually cast shadows. This is, as mentioned earlier, likely for performance reasons.

The game also has a reasonably accomplished post-process rendering pipeline. As mentioned earlier, we’re looking at a temporal anti-aliasing solution here with excellent coverage. While image quality tends to be on the softer side regardless of platform, aliasing is handled well, even on base consoles that render in at a lower resolution.

We see a number of other post-process effects deployed as well: Chromatic aberration is in play, as well as a high-quality per-object motion blur. Depth of field in cinematics, though, is of middling quality. The game does feature ambient occlusion, but the SSAO implementation on consoles doesn’t have the best coverage.

Comparing the Remake with the Original Resident Evil 3 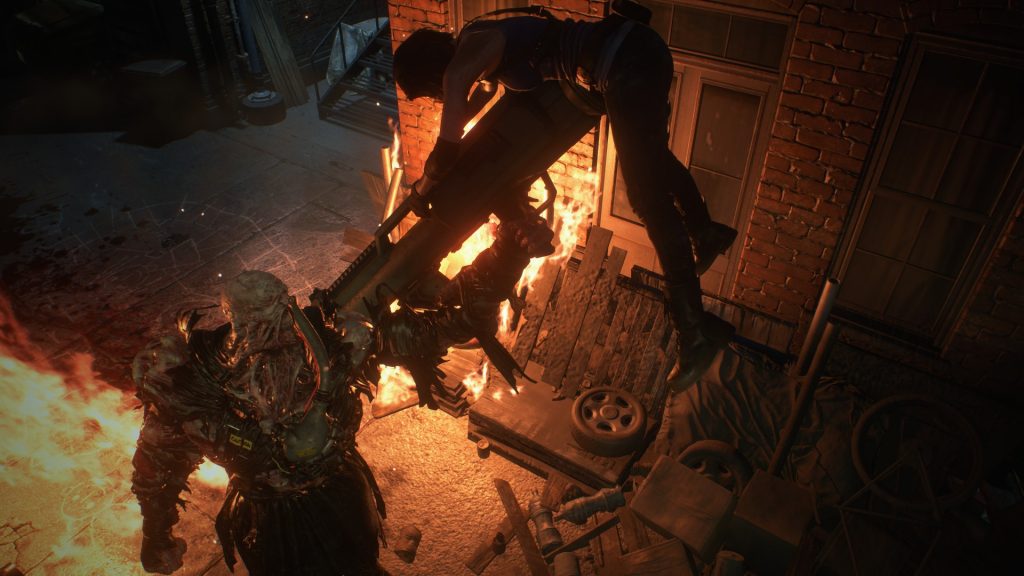 A common critical complaint has been that the Resident Evil 3 remake has little to do with the original game, apart from sharing a common narrative, with the remake even omitting a number of key set locations. That being said, this is an incredible-looking game and an excellent showcase of just how far rendering technology has come in the 20 years since the original Resident Evil 3. It’s interesting to note that the real-time environments in the Remake look substantially better than even the pre-rendered backgrounds in the original.

A lot has changed in twenty years. All aspects of rendering are now in realtime. The original was built with 480p assets in mind: some versions like the PlayStation 1 iteration actually operated below that, circa 320p. In terms of asset quality, we’re looking at something like a 15x increase in fidelity when comparing the game’s 480p output to the Xbox One X’s top-end 4K.

The other change is, of course, the move to a more conventional third-person action setup, as opposed to the tank controls and fixed camera angles of the original Resident Evil 3. Raccoon City has never looked as good as does now, arguably even when compared to the Resident Evil CGI movies. 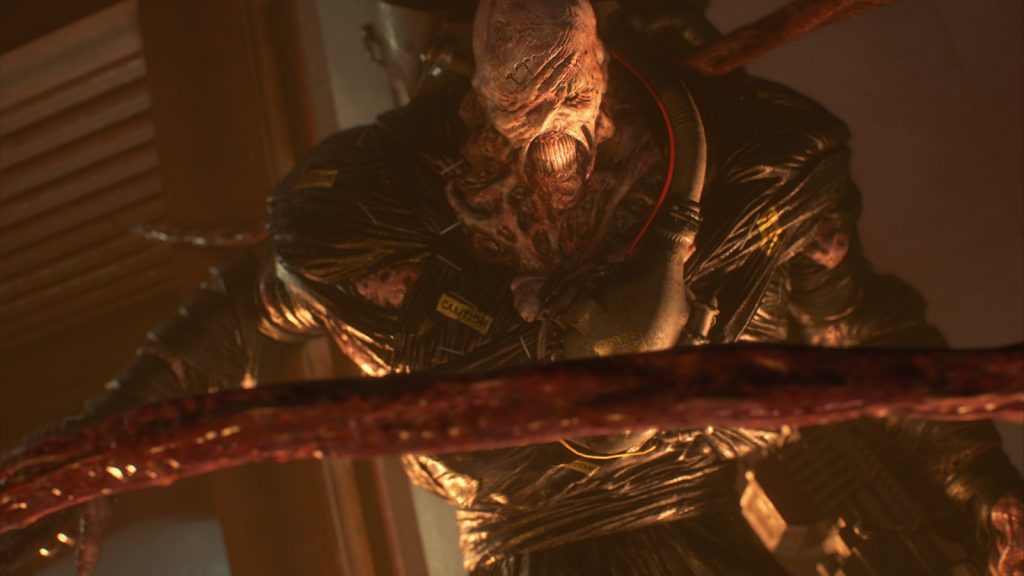 Regardless of the platform you play on, Resident Evil 3 is a great late-gen showcase for Capcom’s RE Engine. It’s accomplished lighting system and excellent character and environmental modeling create a great-looking–and frankly terrifying environment to play in. While purists might take issue with the game’s linear nature, it’s a great introduction to the early Resident Evil franchise for a new generation.

Our only real complaint is with regards to inconsistent performance, thanks to a puzzling resolution on the Xbox One X and an unlocked framerate. Apart from that, this is a great eight-gen swansong. We look forward to seeing what Capcom will do on the Xbox Series X and PlayStation 5 next year.