And it's only for Japan. Does that break your heart? 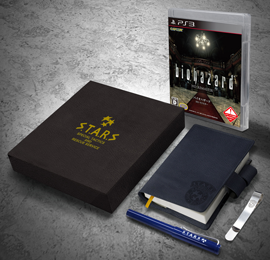 Resident Evil HD Remaster is actually a thing. It remakes the original game in HD, and will be out on PS3, PS4, Xbox 360, Xbox One, and PC. The best part is that this HD remake won’t be remaking the original PS1 game (which, let’s be honest, kind of sucks now), but rather, the Gamecube remake, which was a breathtaking game, and may have been the best game in the franchise so far.

Capcom understands how, to series fans, this is a big deal, so it has announced a limited Collector’s Edition (pictured above). This Collector’s Edition will come with a S.T.A.R.S. notebook cover, Resident Evil 2015 notebook a S.T.A.R.S. model ballpoint pen from Lamy, a S.T.A.R.S. metal clip, a 48 page art guide book and a G. Trevor floor map. Does that sound appetizing? It does to me.
You know what the kicker is? It will be available only in Japan (and only for the PS3 version of the game).