Rise of the Tomb Raider Review – Rise Up

Lara Croft returns in one of her (and the genre’s) finest adventures yet.

It starts on a snowy mountain pass (spoilers). You as Lara Croft aren’t being chased by an overwhelming force of enemies. You’re not hanging off of ledges just yet or struggling for survival. Lara’s feet shuffle through the snow, leaving long shallow marks that are eventually covered up, and it’s little more than a stroll up this treacherous peak. At that moment, you look around the world that Rise of the Tomb Raider presents to you and admire the mountain ranges, the sun that’s trying its best to warm Lara at this altitude and even the little specks of snow clinging to her hair. Whether you realize it or not, Rise of the Tomb Raider is going to be something special and thankfully, the game doesn’t take too long to make that obvious. 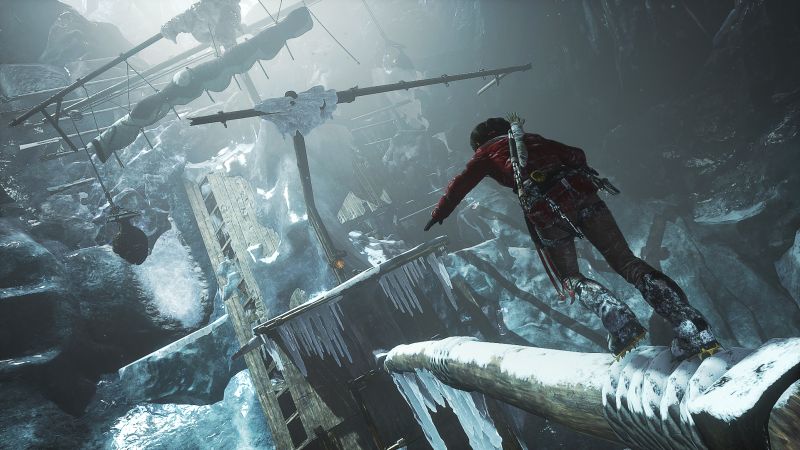 "Crystal Dynamics’ presentation and pacing with the story is on point – the transitions from gameplay to cut scenes felt natural and fluid. You never feel like you were out of the action for too long even when a lengthy cinematic comes up."

Things have been rather chaotic for Lara Croft, the heir to the Croft family, ever since she escaped from Yamatai. A year has passed and Lara is currently working to discover the truth behind an artifact believed to hold the gift of immortality. If Tomb Raider was the catalyst for Lara’s transformation into an adventuring Croft, then Rise of the Tomb Raider shows us flashes of her upbringing and relationship with her father. It honestly makes you wonder if Lara would have evolved to be the same myth-obsessed tomb raider we know and love had she not suffered the events of Yamatai.

Crystal Dynamics’ presentation and pacing with the story is on point – the transitions from gameplay to cut scenes felt natural and fluid. You never feel like you are out of the action for too long even when a lengthy cinematic comes up. 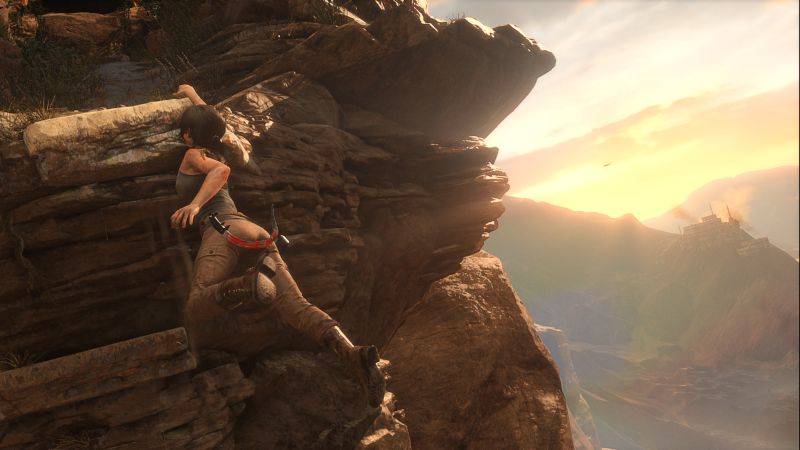 "In Rise of the Tomb Raider, everything feels more natural and you’ll quickly find yourself picking off targets without much trouble."

Of course, Rise of the Tomb Raider isn’t just about the Croft family – it’s also an adventure that takes you from Syria to Siberia in search of the ancient city of Kitezh. While Lara is chasing after this artifact, a mysterious organization named Trinity isn’t very far behind. What are Trinity’s motivations? Why are the Crofts such a huge threat to them? Can Lara clear her father’s reputation and ultimately prove he was right all along?

When you ultimately do get into the game, it will feel immediately familiar to fans of the reboot. Lara still has a pick-axe which she can use to climb up walls. She can also clamber across, leap to adjacent ledges and step off of walls to get to higher places. The shooting mechanics are more or less the same as well, which isn’t a bad thing at all – you’ll start off with a pistol and eventually fashion a bow for yourself in the wilderness. Some of the biggest new additions include the ability to sprint and the grappling hook, which expands your movement options even more. As it stands, these aren’t just little additions to take advantage of the larger environments – they actually lead to some real cool gameplay.

For instance, Lara’s grappling hook can be used to take the high ground when stealthily moving around enemies. Your movement options expand significantly with its use and it allows you to choose between being a quiet assassin or just a ghost that was never there. There’s nothing stopping you from going all-out and straight up murdering every enemy in your path of course. Overall, the combat feels as fluid – if not more so – than its predecessor. When moving from Tomb Raider on the PC to the Definitive Edition on Xbox One, I found quick shots with the bow to be tough. Headshots were also fairly difficult. In Rise of the Tomb Raider, everything feels more natural and you’ll quickly find yourself picking off targets without much trouble. 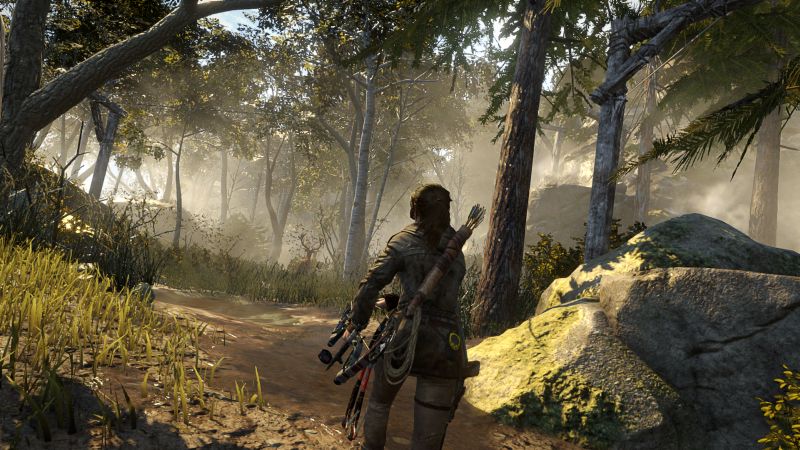 "Did you feel let down or slightly underwhelmed by the tombs in the original game? Crystal Dynamics has heard you loud and clear."

Of course, this is a survival game in many ways. Lara will have to do more than just explore and kill opposing enemies – she also has to hunt. This opens up the game’s admittedly cool crafting system which actually calls back to Far Cry 3 in some ways. If you want particular equipment like fancier bows or a better winter coat, you’ll need to go out of your way to hunt some of the rarer animals. This means waiting at specific times of day and during the right weather condition.

It gives a bit more depth to the game – you can still progress naturally and earn upgrade points for perks along with making your current weapons stronger. If you’re seeking something extra, then Rise of the Tomb Raider can keep you engaged with its hunting. While some games can tend to drag when it comes to gathering resources, Crystal Dynamics strikes a good balance between hunting and keeping you focused on the game’s main treats like exploring and experiencing the story.

And then there are the tombs. Did you feel let down or slightly underwhelmed by the tombs in the original game? Crystal Dynamics has heard you loud and clear. Puzzles must also be solved to figure out the path ahead but don’t think this is the extent of it. Rise of the Tomb Raider features some deviously challenging tombs and the upgrades are well worth the exploration. We won’t spoil some of the other tombs you’ll encounter because really, seeing them for yourself is part of the fun, but rest assured that this is a Tomb Raider game in both name and heart. 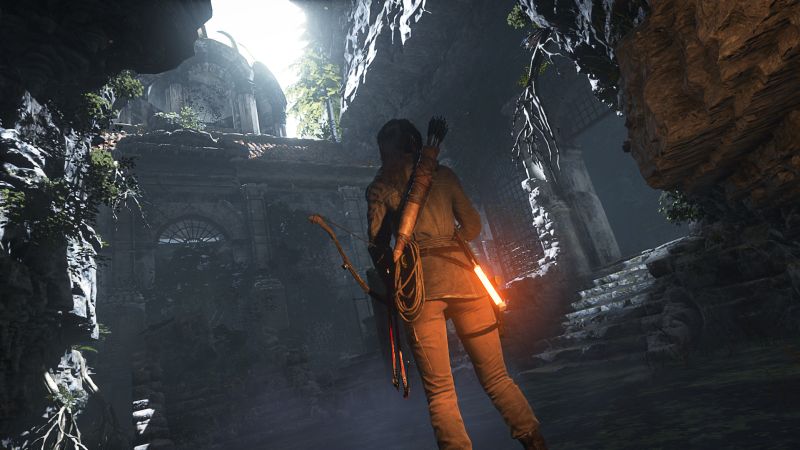 "It has its imperfections here and there but your year simply won’t be complete without experiencing Rise of the Tomb Raider."

Enough also can’t be said about the game’s graphics. Snow reacting naturally to your footsteps is just the start (with heavy snowfall hindering your movements, so it’s more than just aesthetic). Everything from the cracks in ice to the birch on trees looks amazing. The varied details in the environments from the wear and tear in tombs to accumulated dirt and blood on Lara can be both subtle and breathtaking.

One does notice a few frame drops here and there, at times during cut scenes, but this is a smooth ride for the most part. There may be times when you encounter the odd glitch or two – Lara did tend to fall through the ground and out of the game world on one occasion – and platforming can still be a bit of trial and error (accompanied by the now signature gruesome deaths). However, this is a solid experience through and through.

Rise of the Tomb Raider is primarily a single-player experience but offers a lengthy campaign even if you don’t try to find everything. I haven’t had the chance to try out the Expeditions mode yet but given the strength of overall mission structure in the main game, I can’t wait to see how some of the hub areas will play out with modifiers active. Even if it’s releasing under the shadow of Fallout 4, Crystal Dynamics has cranked out a high quality, action adventure platformer that feels mechanically familiar but inherently fresh thanks to new movement options, combat strategies and hunting activities, to say nothing about the new tombs and exploration. It has its imperfections here and there but your year simply won’t be complete without experiencing Rise of the Tomb Raider.

Some glitches arise, including Lara falling through the game world on some occasions. Platforming does have its frustrations every now and then. Might be too similar to the original for some.

A copy of this game was provided by developer/publisher for review purposes. Click here to know more about our Reviews Policy.
Tagged With: Crystal Dynamics, Microsoft, Rise of the Tomb Raider, Square Enix, xbox 360, Xbox One