Robinson The Journey, VR and The Future: An Interview With Crytek’s Niklas Walenski

Robinson: The Journey director discusses the studio's adventures with VR.

There are a number of companies so whole-heartedly devoting themselves to virtual reality, especially when the viability of the medium is still in the early stages. One such company is Crytek which introduced significant changes to its CryEngine to facilitate the development of VR titles. It also has two major VR titles – The Climb, which is available already and Robinson: The Journey which launches exclusively for PlayStation VR in Winter this year. What else can we expect from the house that created CryEngine?

GamingBolt spoke to Niklas Walenskin, game designer for The Climb and Robinson: The Journey, about the same and delved deeper into Crytek’s mindset when it comes to virtual reality.

"The Climb’s exploration is focusing on the navigation in the environment. It is about finding the next grip and the best route to the top. Robinson’s exploration is more about the world and the interaction with it."

How has progress been on Robinson: The Journey? How have its game play elements expanded over time?

During development of Robinson: The Journey we went through multiple iterations where we tested different ideas and mechanics. Now the core loop has been tightened and we removed components which didn’t feel right for this installment. In future VR projects we would like to bring those back, because we think they are great ideas once the player is familiar with the medium and the scenarios we create.

Do you think it will be a benchmark setter as far as visuals go on the PlayStation VR?

As Crytek we are known for the graphics quality we can achieve with CRYENGINE, and like on every platform we are doing our best to push the graphics on PSVR to its limits. We want to set a benchmark on this new platform.

Furthermore is Robinson: The Journey a complete exclusive to PSVR? Any chance of it coming to Oculus Rift or Vive?

We’re launching Robinson: The Journey first for PlayStation VR and all our efforts are focused on creating the best possible product on Sony’s platform.  We do have plans for the title’s future which see as many players as possible experiencing Robinson.

The Climb looked really good when we saw it at GDC. How do its exploration aspects and challenge differ from Robinson: The Journey?

The Climb’s exploration is focusing on the navigation in the environment. It is about finding the next grip and the best route to the top. Robinson’s exploration is more about the world and the interaction with it.

Still both titles have benefited from each other. You can interact with the world in The Climb and you have navigational exploration in Robinson: The Journey. They are not the focus in each of the games, but they add some variation and make the gameplay more interesting. 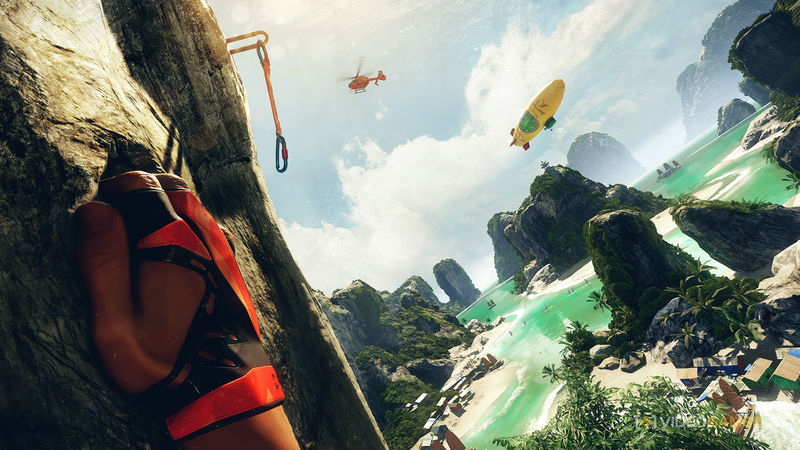 "We strongly believe that VR has a bright future. We already see it not only being used in games, but also other fields like movies or room planning."

When can we expect to see The Climb and Robinson: The Journey release?

The Climb is available since April 28 and Robinson will be released close to the launch of the PSVR in winter of this year.

Do you have any plans to bring The Climb on the PlayStation VR?

At launch The Climb will be an Oculus Rift exclusive title. We are lucky to have a great publishing and development partner in Oculus, who shares our ambitions for the game. We’ll work together to make that vision come true for the Rift.

With so many different VR devices and engines floating about, how does Crytek feel about the potential of the medium in the long term?

We strongly believe that VR has a bright future. We already see it not only being used in games, but also other fields like movies or room planning. With more companies investing in VR and making it accessible to more and more people we are sure that it is a technology that came to stay.

With the resources being invested in VR by Crytek, what kind of returns are expected down the line?

We hope that we can help pioneer VR and show that CRYENGINE is the “go-to” platform when it comes to VR development. Apart from that we want to show people around the world how magical VR can be.

"PSVR definitely has an advantage when it comes to accessibility, since people will only need to buy a PlayStation 4 to use the headset."

Which VR device has you most excited for the long-term?

All of them are unique in their own way, so it is hard to pick a favorite. I guess that the future will show which VR device will be the best suited for each kind of person.

Furthermore, do you think the PSVR will have some sort of head start as far as sales go compared to Rift and Vive? I mean the PSVR already has the PS4 install base as a backup and a low entry price.

PSVR definitely has an advantage when it comes to accessibility, since people will only need to buy a PlayStation 4 to use the headset. However, it is also the last of the major three headsets to be released this year, so the Rift and the Vive will already have a user base.  In the end the software available on each platform will determine its success, and it is hard to judge that right now.

Crytek has been quiet regarding AAA games development. What is happening with Hunt: Horrors of the Gilded Age and Arena of Fate?

Both games are still in development and we can see weekly progress. We hope we’ll able to share interesting news soon.