Uncle Sam wants you to join the Saints. 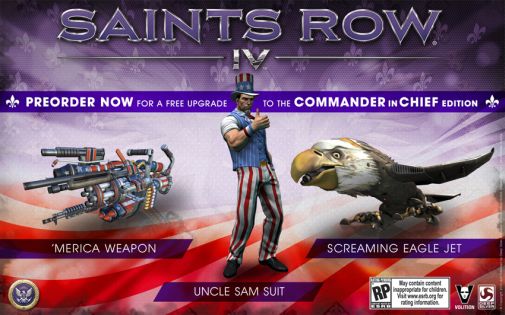 Deep Silver has announced that those who pre-order Saints Row IV from major retailers in North America will be availbel to freely upgrade to the Commander in Chief Edition, which offers plenty of goodies in keeping with the presidential setting the game starts with.

Some of these bonuses include the Screaming Eagle jet which fire rockets and Sonic Screams besides being shaped like a bald eagle from Hell; the Uncle Sam uniform uniform, which looks pretty swag; and the insanely over-powered “‘Merica” gun which features flamethrowers, high powered dub step guns and rocket launchers on the same weapon.

Because the only way to make sure it’s dead is to absolutely kill it beyond the point of recognition.

Saints Row IV’s Commander in Chief Edition will cost $59.99 on PS3 and Xbox 360 and retail for $49.99 on PC. For those who don’t live in North America, there’s no need to worry: the CIC Edition will be available globally.