Now that developers like Atlus and Marvelous are nipping at the heels of Koei Tecmo’s Warriors games with the excellent Persona 5 Strikers and the Fate Extella games respectively, it makes a lot of sense that Koei and Omega Force would want to shake things up with their Warriors games. The Warriors games are not the only show in town anymore so it’s a wise decision. Furthermore, the Samurai Warriors series in particular has always sort of lived in the shadow of the Dynasty Warriors games, with most on the outside not really seeing much of a difference between them despite those differences always being there. Those days appear to be over now though, with Samurai Warriors totally changing up its look, refocusing its emphasis, and reimagining its characters. Change is often good for a long-running franchise, but it can also be risky. For Samurai Warriors 5, that risk both pays off and costs the overall experience in different ways.

First things first, if you are a long-time Samurai Warriors fan who just wants more of that frenzied, ultra-satisfying combat that lets you slash, blast, and bludgeon your way through legions of enemies in mere seconds, then, no need to fear. Samurai Warriors 5 feels just as great to play as any other Warriors game when you’re in the thick of battle. The square button for attack combos being punctuated with a press of the triangle button at any point – totally changing the combo – is still a system that works well as a foundation for a game like this. Unlocking longer combos, and thus more places to put that triangle button, and thus more possible combo results, is still a fun process that feels continuously rewarding no matter how repetitive it may be in reality. As per the previous Samurai Warriors games, triangle by itself still gives you a hyper attack that lets you zoom from one gaggle of life bars to the next, and collect an even bigger cloud of airborne enemies, flailing about as you push forward and build up that musou gauge.

"Change is often good for a long-running franchise, but it can also be risky. For Samurai Warriors 5, that risk both pays off and costs the overall experience in different ways."

It’s a solid basic combat system and stays fun throughout the experience. No need to fix what isn’t broken. But Koei did go an extra mile by adding in the “ultimate skills” which bear an unmistakable resemblance to Fate Extella’s “active skills” by essentially letting you put various special attacks or stat boosts in four different slots that can be activated by holding R1 and pressing the corresponding face button you’ve mapped them to. These moves are a great way to break out of a sticky situation with a powerful officer or just go a long way to keeping things interesting. As you unlock more things to put in those slots, you’ll likely find yourself experimenting with them a lot as they can drastically change how you play once you get used to using them and working around their cool down times. So, with combat that largely keeps what worked from the last few games intact but adds in some smart (albeit shamelessly borrowed) tweaks that freshen things up, the updates to the combat are overall a net gain for the total experience. On top of that, the new move sets, new character designs, and attractive manga-inspired visual style is more than enough reason to give Samurai Warriors 5 a serious look. Especially if you are a newcomer or a casual fan.

That said, as so often comes with drastic change, some Warriors fans might feel a bit left out. Namely, the fans who are used to the number of modes and characters that were found in the previous few games. Given how early in the timeline that Samurai Warriors 5 takes place, it makes sense that some of the characters from 2, 3 and 4 wouldn’t be there. But it also scales back the experience even more by only really focusing on Nobunaga Oda and Mitsuhide Akechi with the vast majority of the Musou mode’s scenarios revolving around their perspectives. Other characters come and go, and as you unlock “free mode” versions of previous levels, you can ultimately play them with whatever character you want, but there’s no mistaking how much of a slimmer feel this decision gives the game. Especially when you also realize that the main Musou mode and citadel mode are the only two modes. And despite Citadel’s timed, objective-oriented missions, they don’t really spice things up that much. It’s nice to have I suppose, as it does give you another way to play and your stats do carry over between both modes, but it just never quite felt like enough to me given that this game has no “historical mode”, no “conquest mode” and no character creation mode. It even scaled back the ability to switch between two characters on the fly, by only letting you do that in certain missions. The game clearly wants you to replay levels and experiment though, as you will want to upgrade your dojo and blacksmith buildings as fast as possible to open up your arsenal, but that’s not the same as having multiple modes to play with custom characters. For the Warriors fans who enjoy the vast array of ways to play that the older games have, Samurai Warriors 5’s leaner take will likely leave you wanting in that department.

Since the story of Samurai Warriors 5 takes place so far back in the chronology, newcomers should feel as welcome to hop in as any other time. The story, while limited in scope, does a good job of staying engaging as Nobunaga, his wife No, and their allies and enemies, cross paths in these fun, exaggerated versions of real historical events. The new art style comes together with the series’ trademark outlandish outfits and exaggerated dialogue quite well in the cutscenes. Almost as if it should have always been this way. I’ll admit I wasn’t sold on the new look when the game was announced, but after you see it combined with everything else, it does click into place rather well. The story itself also does benefit in a way from the more focused approach. Despite it only being centered around a few characters, we do get a much closer look at those characters with more time devoted to their relationships and personal struggles. The script doesn’t fly off the page and these characters are only so deep, but it’s obvious that they didn’t choose to narrow this game’s focus for no reason. They’re clearly going for quality over quantity here, and it’s a respectable trade in terms of the story. 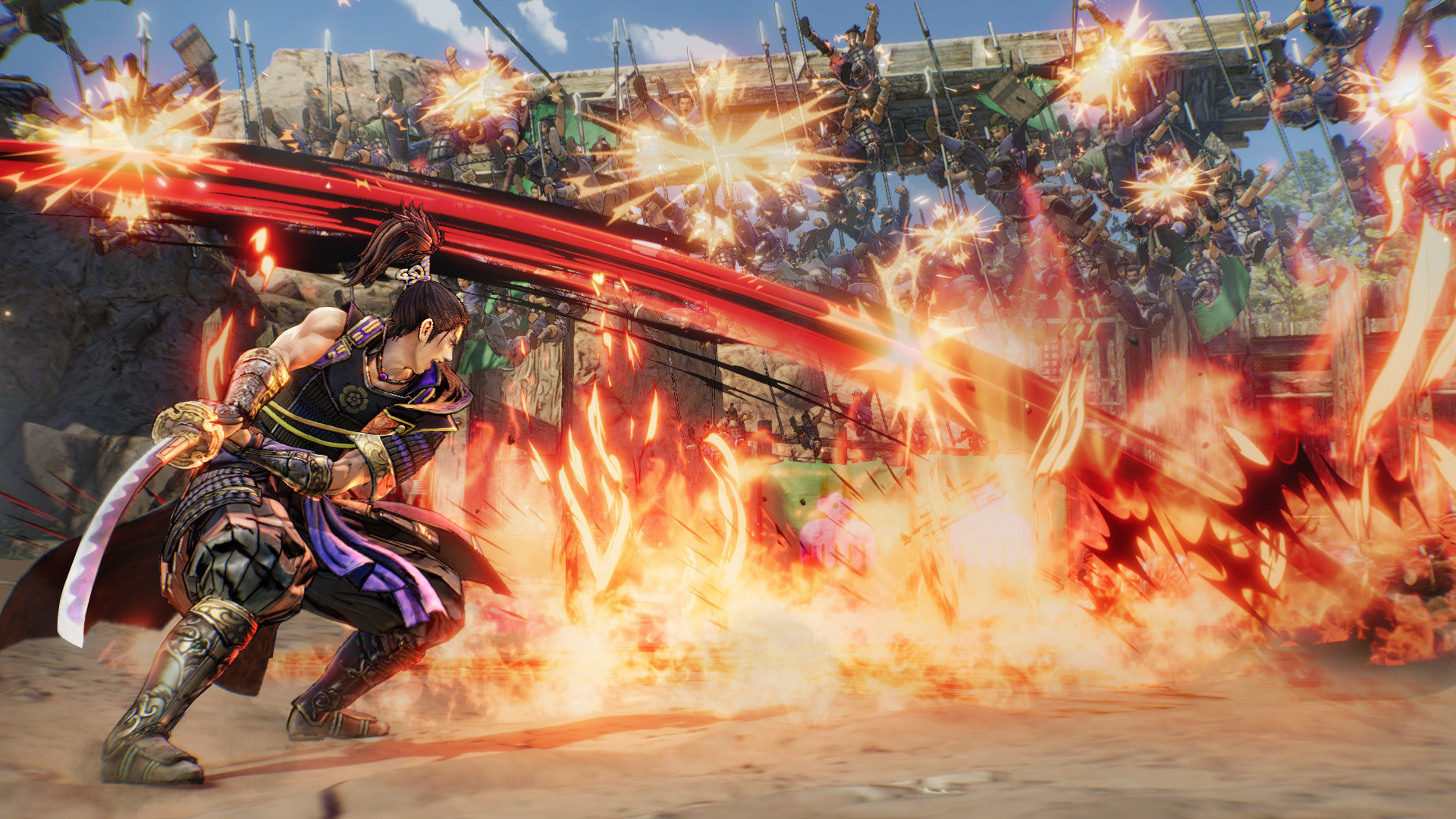 "The script doesn’t fly off the page and these characters are only so deep, but it’s obvious that they didn’t choose to narrow this game’s focus for no reason. They’re clearly going for quality over quantity here, and it’s a respectable trade in terms of the story."

Samurai Warriors 5 might very well go down in history as a very divisive game in the series. It’s got a different look, and contracted story, and decidedly less content than its predecessors. Getting one of the better-told stories in the entire series as well as a fun, liberally updated combat system makes that trade feel fair most of the time, but it never feels like a bargain. It’s hard to not appreciate how well Koei Tecmo has done with taking this series in a new interesting direction, and it’s a direction I hope they continue with, but it shouldn’t have come at the cost of so much of what Samurai Warriors fans rightly come to expect from the series.

Ultimate skills and other tweaks add greatly to the moment-to-moment combat; The story ultimately benefits from the game’s tighter focus; The art style compliments the rest of the game better than you might expect.

A severe cutback of game modes and customization may rightly deter long-time fans who were expecting more.

Final Verdict:
GOOD
Samurai Warriors 5 makes the series stand out from Koei’s other games and updates the musou formula in smart ways, but unfortunately cuts too much of what worked in the past to make it universally recommendable to hardcore fans.
A copy of this game was provided by Developer/Publisher/Distributor/PR Agency for review purposes. Click here to know more about our Reviews Policy.