President Yoichi Wada weighs in on why we're seeing a rise in social games from SE.

After the announcement of Star Galaxy, a browser based social game set in space, and so many other releases this year like Final Fantasy: Airborn Brigade and The World Ends With You: Live Remix one could easily ask the question: What gives, Square-Enix?

Or more accurately, why has the Japanese gaming giant been focusing so much on social gaming?

According to president Yoichi Wada, “In HD games, we usually have a mixture of profitable and unprofitable titles, generating profit as a whole. As for our Social Gaming & Others [division], we only have very few titles that are unprofitable.” 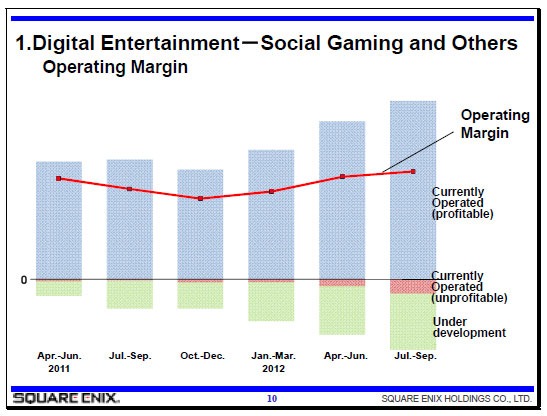 The company released a chart to this effect, showing its current range of profitable and unprofitable projects along with those still under development over the past year and a half. And that blue bar being significantly bigger than that red bar is the reason for the green bar being larger than it was at the same period a year prior.

Square isn’t completely off the console grid – not by a long shot – but their increasing insistence on social games shows they’re seeking other modes of profit with less risk.