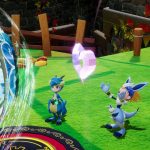 Yuji Naka reveals Balan Wonderworld's development issues and his conflict with Square Enix in an explosive series of tweets.

Metacritic Reveals the Worst-Reviewed Games of 2021, Including eFootball, Balan Wonderworld, and More

Konami's disastrous eFootball has emerged as the worst-rated game of 2021, according to review aggregator website Metacritic.

There have been some great games this year and some average ones. But there have also been some major disasters - check out 15 of them here.

Sonic co-creator and Balan Wonderworld director Yuji Naka confirms he left Square Enix at the end of April, and says he might retire.

Yuji Naka, one of the co-creators of Sonic the Hedgehog, updated his LinkedIn and Facebook profiles to show he is no longer with the company.

Balan Wonderworld Review – Anything but Wondrous

Some good ideas fall flat in a shallow gameplay void.

Balan Wonderworld Day One Patch Will Address Issues With Movement, Camera, and Difficulty

The patch will attempt to address as many criticisms for the platformer's demo as possible.

A look at three chapters of various stressed out folks.

This month is lined up all kinds of great releases.

A new trailer hits alongside the demo on all platforms.

Balan Wonderworld Demo Out on January 28th for All Platforms

Four Acts, local multiplayer, and raising Tims will be available to try out.

Lots going on in the colorful fantasy world.

Two different areas get shown off in all their brightness.

Here's a brief look at one of the game's twelve unique worlds.