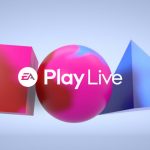 EA Play Live 2022 is Not Happening

EA says "things aren't lining up to show you everything on one date." It will reveal more on its projects "when the time is right for each of them."

EA Play Live Start Time on July 22 Has Been Revealed

The EA Play Live pre-show will begin at 10 AM PT on July 22. EA has also confirmed that wrestler Xavier Woods (aka Austin Creed) will be hosting the show.