The story sees Ramlethal Valentine venturing to the outskirts of Illyria to investigate an emergency. May, Baiken and Faust also appear.

A new stage and Digital Figure mode, which lets one create custom scenes with their favorite characters, are also releasing on March 28th.

Guilty Gear Strive's newest update brings new content to the game, including Baiken's introduction to the roster, as well as a new mode.

Season pass holders can download the DLC character on January 28, with solo purchases going live on January 31. A new Combo Maker mode has also been revealed.

Following a recent render leak, , it seems players have found some shots of the upcoming DLC character for the game.

A Californian bakery shop seemingly leaks the render for upcoming character Baiken, while announcing a collaboration with the game on their website.

Guilty Gear Strive – Baiken Confirmed as Next DLC Character, Out in Late January 2022

The fan favorite character who last appeared in Guilty Gear Xrd Rev 2 is the fourth character to be added with Season Pass 1.

A new character to the series, Happy Chaos fights with dual pistols and body doubles. He'll be available on December 3rd as standalone DLC. 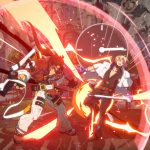 Summon Servants to launch at your foes, or create opportunities for your combos. Jack-O' arrives tomorrow for Season Pass 1 holders.

The masked fighter returns, somewhat different thanks to the restoration of Aria's soul. She's out on August 30th for all players.