Set in same universe as Nier, the mobile RPG will launch on schedule in the afternoon (PDT) for iOS and Android devices.

NieR Re[in]carnation Launches in the West on July 28

Pre-registrations for the mobile title are currently open, with Square Enix confirming that over 400,000 people have already registered. 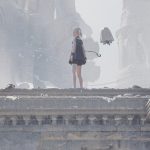 NieR Re[in]carnation Has Been Downloaded Over 3 Million Times

The mobile extension of the RPG series is a hit.

The game won't make the original target of this year.

NieR Re[in]carnation Confirmed To Be Coming To The West

The first mobile title in the RPG series will leave Japan.

There is actually combat in this game.

The mobile title also sports some excellent music like its predecessors.

The mobile title will apparently be free to play with microtransactions.