“Having gotten somewhere with it, as a creator I’d like to see it to the end," says PlatinumGames Hideki Kamiya following recent comments about the cancelled Scalebound.

PlatinumGames CEO Atushi Inaba says the studio would "like to have a proper discussion with Microsoft" about the possibility of reviving Scalebound. 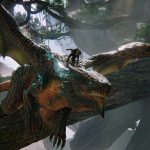 Scalebound Not Being Worked On, Confirms Phil Spencer

What Went Wrong With Scalebound?

What the hell happened to Scalebound?

"If the opportunity arises, it's something we would love to return to," says studio head Atsushi Inaba.

Scalebound Cancellation Was the Fault of Both Platinum and Microsoft, Says PlatinumGames Head

If this is true, it would be a hell of a coup for Nintendo.

Don’t Read Too Much Into Scalebound Revival Rumors, Says Insider

But should you expect it to return?

JP Kellams is no longer with the company.

'I've learned when we try to do something ambitious with a new team, or a new IP, I'd rather not run out there and put a target on it too early.'

If it's any consolation.

What Scalebound's cancellation could mean.