Valheim is headlining a new line-up of indie games, which includes titles like Amazing Cultivation Simulator, Eville, and games published by Skybound. 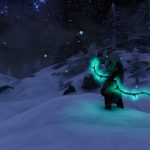