The thing that struck me the most when I was playing The Falconeer wasn’t its striking visuals – which, even on an Xbox One S, stand out as being remarkably pretty, buoyed as they are by a very strong art style – nor was it the game’s sheer expanse. It wasn’t the compelling lore and backstory for this imaginative world that the game was doling out in bits and pieces, nor was it the actual aerial dogfight action (which we’ll get to in a bit). The thing that stood out to me was that all of it – the graphics, the combat, the world and its backstory, everything except for the audio, really – was done by one person. This rather imaginative and expansive aerial dogfight game is the brainchild of one person.

That really does put a lot of things in perspective. The Falconeer has quite a few issues, some small, others rather obstructive, but in the end, that all of this was the work of one person really helps appreciate the game’s strengths that much more, while explaining why some of its flaws are the way they are. Games far less impressive have come out of development teams far bigger and better equipped with resources – a game by one person having a few misses can hardly be held against it as much, given that.

"Missions are preceded by an overview of the map of their setting, with characters explaining the history, politics, economy, or whatever other factor will end up being relevant in your coming mission, in voiceovers."

The Falconeer is an aerial combat game. These used to be all the rage not all that long ago, although the genre isn’t quite as popular now. Nonetheless, even if it were, The Falconeer would stand out. One part of this comes down to its incredibly imaginative setting, a vast ocean world with tiny dotted islands controlled by warring factions, and all relying on the eponymous falconers to help guard their turf a bit. These falconeers are pilots of some pretty oversized birds, armed with weaponry enough to be able to take on almost anything the sea can throw at them – though they are pilots riding on the back of a bird, which means hits damage you quite a bit too.

The Falconeer is clearly very proud of its setting. Missions are preceded by an overview of the map of their setting, with characters explaining the history, politics, economy, or whatever other factor will end up being relevant in your coming mission, in voiceovers. Each place ends up being defined well, and though you never really see much of them, you start to get a feel for these individual cultures in the world, whether it be an imperial center that can barely keep territories under its rule, owing to being impervious in their own ivory tower, or a fringe trading town, which has to deal with the dual concerns of catching the notice of the empire, and having to fend off against pirates and smugglers. It’s an extremely rich setting, and The Falconeer uses it to paint a picture of a world perennially in conflict, with these five factions barely and tenuously hanging on and surviving.

"Unlike almost every other game, no 3D model in this game uses texture mapping of any sort, which means that the objects you see gain their form and look entirely from the in-game lighting. The look ends up being rather unusual, but really immersive and bold, immersing you in the rich world, and adding more substance to it along the way to boot."

It helps that the setting is brought to life by some rather striking visuals. I spoke about the strong art earlier, but what also helps the graphics stand out is the rather unusual rendering techniques that solo developer Tomas Sala has leveraged. Unlike almost every other game, no 3D model in this game uses texture mapping of any sort, which means that the objects you see gain their form and look entirely from the in-game lighting. The look ends up being rather unusual, but really immersive and bold, immersing you in the rich world, and adding more substance to it along the way to boot.

Traversing this world on birdback can feel great – once you finally have a hang for the controls. They’re not really difficult to master as far as flying is concerned, and you get a fair degree of customization to further alter them to suit your needs. Everything, from slow dives to accelerating, to flapping in place, to barrel rolls, is easy to pull off, and a sense of zen-like peace and nirvana can almost set in on you when you’re just flying around the world, thanks to the rhythm of the controls, and the beauty of the surrounding world. The controls, when flying, feel elegant.

You’ll notice I have qualified my praise for the controls by specifying it extends only to the flying controls, and there’s a reason for that. For all the elegance that you can experience when flying around, combat feels clumsy and hectic, and not in a good way. Your aiming reticle is mapped to the same analog stick as your turning and movement – not an issue in and of itself. However, the reticle moves extremely slowly relative to your actual movement and turning – extremely slowly.

This becomes an issue, creating a disconnect between your quick and rapid turns and movements, and the extremely slow aiming, meaning that trying to actually fire on target becomes an annoying game of chasing the target across the screen with your slow as molasses reticle in 360 degrees, in an effort to actually land a hit on them. The Falconeer actually tries to make some concessions – you have a target lock on button, for example, as well as a button to reorient yourself with respect to your target instantly. But this scarcely helps when the aiming reticle is still so slow, and when there are so many enemies swarming you from all sides and directions, and when hits can take out a good chunk of your health. 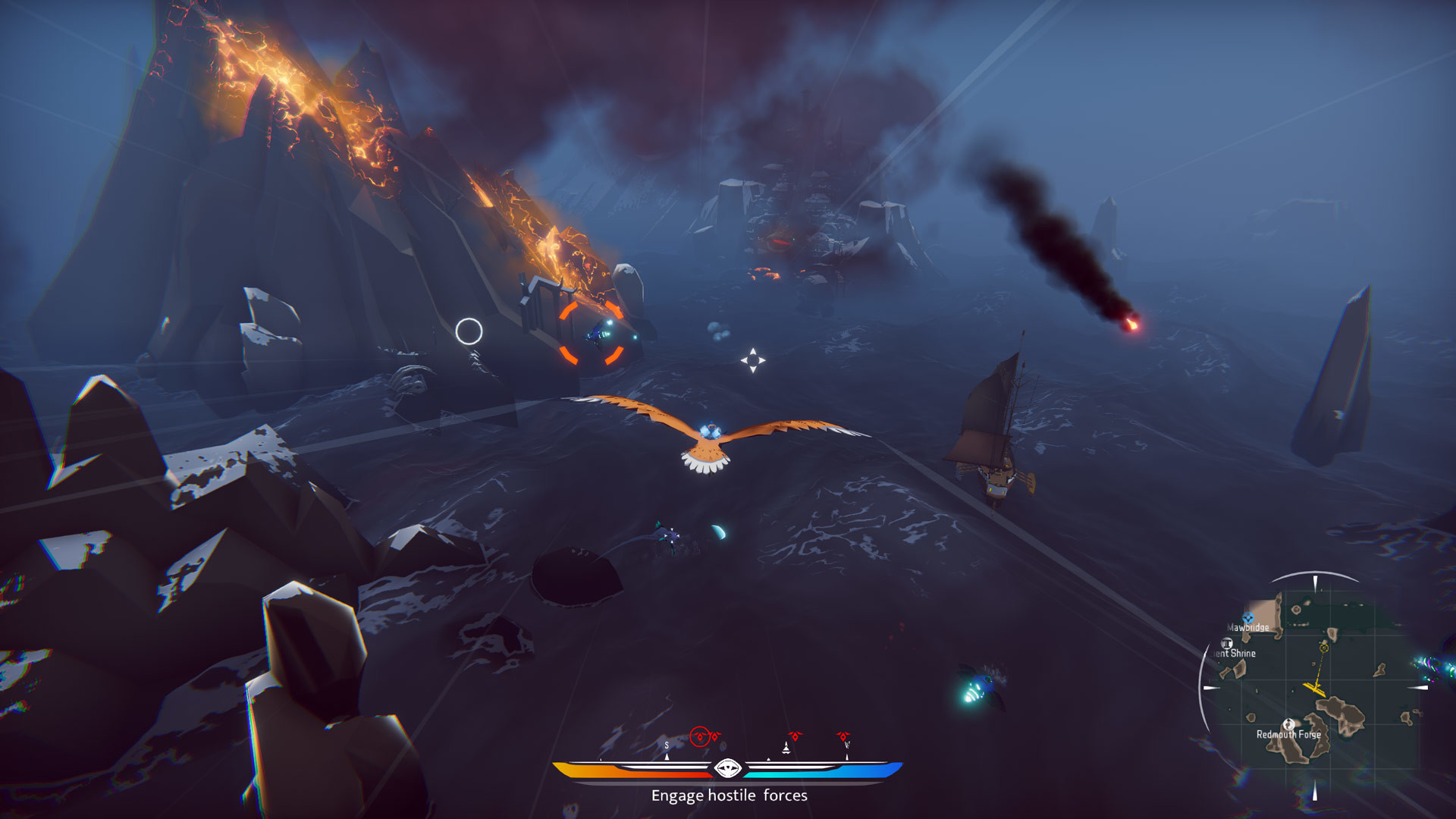 "I can imagine this combat actually feeling great on a PC, where the accuracy and movement of a mouse is far beyond the sluggishness of the analog stick, but at least on console, I can say that the combat was my least favorite part of the whole experience – which is a bit of an issue for a dogfighting game."

Combat is, unfortunately, annoying. I found no way to increase the sensitivity of the aiming reticle in the settings menu (and I tried looking multiple times), which struck me as unfortunate given that The Falconeer otherwise actually tries to accommodate player preferences very well. I can imagine this combat actually feeling great on a PC, where the accuracy and movement of a mouse is far beyond the sluggishness of the analog stick, but at least on console, I can say that the combat was my least favorite part of the whole experience – which is a bit of an issue for a dogfighting game.

I wager this feels better on an Xbox Series X (where the game will run in a blistering 120fps), because, again, that has to help with the reticle movement speed. Unfortunately, on the One S, at least, this meant I was losing battles I had no business losing far too easily, which, because the game does not employ any checkpoints in its missions, meant that I would have to start the whole mission over, from the beginning. No matter how close to the end I was.

These annoyances stand at odds with how peaceful and enjoyable simply exploring the world feels. The world of The Falconeer can look empty, but there’s actually a fair bit for you to discover, from locations to lore to an understanding of the geopolitics of the Great Ursee, to even abilities and technology that can aid you in combat. It’s a surprisingly rich world, with a lot on offer, and I would argue the world, and simply flying through it on the back of your giant bird, is the best part of the package.

The Falconeer isn’t a full-fledged slam dunk, then. However, this brings me back to what I said at the start of this review – in the end, this entire game was made by one person (other than the sound side of things, which is also excellent, incidentally). The flaws become easier to excuse in that context. It also helps that the game is budget prices, meaning there is less pressure on it to live up to justifying the value of the purchase of a full priced game. For the price you pay, The Falconeer has a lot to offer.

It looks gorgeous, its got an intriguing world, and exploring and flying can feel great. The issues with the game’s checkpoints and combat unfortunately do drag it down a bit, as does mission design that starts to get repetitive fairly early on – but overall, I walked away from The Falconeer feeling impressed. Xbox players have a fair few good games to choose from at launch, while PC players have no shortage of other (albeit older) flight combat games. But I do hope that Xbox and PC players alike give The Falconeer a good look. It’s not a home run, but the things it does well, it does really well – and sometimes, that can be enough.

Beautiful art style and striking visuals; world is full of secrets to explore; flying around feels great; a really fleshed out and realized backstory helps add a sense of place to the world

Combat controls can't keep up with the hectic pace the game expects from you, and there is no way to adjust control sensitivity; lack of checkpoints in missions means that you end up repeating a lot of the missions very often; mission design can get repetitive

Final Verdict:
GOOD
While it has its fair share of flaws, a compelling world that is rich with secrets and lore, alongside beautiful graphics and engaging flight controls, help The Falconeer stand out and stake its claim to your attention.
A copy of this game was provided by Developer/Publisher/Distributor/PR Agency for review purposes. Click here to know more about our Reviews Policy.