Archive For the falconeer Tag

The Falconeer developer Tomas Sala says that while application of FSR will vary from developer to developer, the tech is an exciting one nonetheless.

The Falconeer: Warrior Edition Launches for PS5, PS4, and Nintendo Switch in August

A new expansion has also been announced, also launching in august. 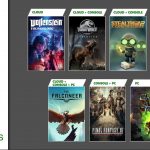 We speak about the Unity engine's next-gen pipeline, the process of The Falconeer's solo development, and more.

Unity's Brett Bibby feels the Xbox Series S is "focused on delivering a similar experience at a lower resolution."

The game is looking incredible in this action-packed trailer.

The developer also hopes to support 4K on the Xbox One X "eventually."

The Falconeer Interview – Take to the Skies