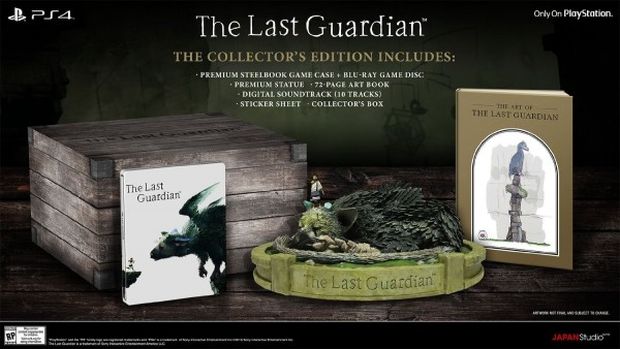 Sony’s The Last Guardian, developed by SIE Japan Studio and genDESIGN, is receiving a Collector’s Edition pack and you can head over to Amazon to pre-order the same.

Costing $119.99, the Collector’s Edition includes a large wooden crate with a premium steelbook that houses the game. It also features a 72 page art book, digital OST, a themed sticker sheet and a large statue of Trico sleeping next to the boy. All in all, it’s not a bad Collector’s Edition and pretty much in line with what we expect at this price.

The Last Guardian will be releasing on October 25th for PlayStation 4 after being announced roughly seven years ago and facing innumerable delays (it was originally meant to release on the PlayStation 3). What are your thoughts on the Collector’s Edition and the game finally seeing a release? Let us know in the comments below and stay tuned for more information on The Last Guardian in the coming months.