Very likely that this is just a mistake by the retailer.

Of all the games that have been delayed because of the ongoing COVID-19 pandemic (and there’s been more than a few), The Last of Us Part 2 is by far the biggest one- and it goes without saying that Naughty Dog and Sony want to sort that out and get the game out as quickly as possible.

While there’s no telling what date they will now land on, there was an interest update on its Amazon page recently. That update was made to its release date, which mentioned a June 26 launch. Though the listing has since been updated to remove the date, Game Rant managed to snag a screenshot, which you can view below.

The most likely scenario here is that Amazon made a mistake- June 26 is the intended release date of fellow first party PS4 exclusive Ghost of Tsushima, so it might just be a case of mixing the two up.

The Last of Us Part 2, on the other hand, currently has no set release date. After taking down its PlayStation Store listing, Sony have now started issuing refunds to those who pre-ordered it digitally. Recently, they said they’re looking into the possibility of an early digital release for the game- read more on that through here. 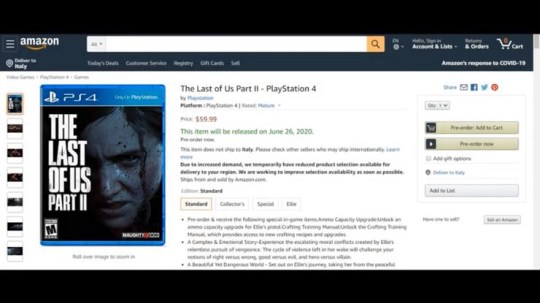