While EA is one of the most renowned publishers in the industry with a ton of valuable IPs and developer talent under its belt, it has long been the subject of bad press thanks to the many questionable decisions it took with its games and business practices. Currently though, the publisher is certainly making moves in the right direction as it tries to right its many wrongs, but some of the wrongs that it has previously done have gone down as some of the most disappointing ones in recent memory. Perhaps chief among them is Anthem, a live-service game that was set to take the world by storm but ended up fizzling out without having much of an impact.

Anthem promised all the elements of what players would want from a live-service title – excellent combat, a fleshed-out world, an ever-evolving world, and meaningful co-op play just to name a few. But that was all in concept, and what we got was a game that failed to deliver on its many promises. That said, Anthem still showed some signs of greatness beneath a buffet of both technical and non-technical problems – but the refusal to put in the required work upon the IP lead to the game’s sad death. To that end, here’s the rise, fall, and death of Anthem.

Anthem’s tale of development is a turbulent one. Plans for Anthem were being made all the way back in 2012, and after a ton of ideas and prototypes – Anthem (which was still unnamed at the time) was first shown off at E3 2014. The developers showed concept art for the environment as they made promises about the game’s ever-evolving world and the co-op nature of the gameplay. The team was optimistic about crafting something new and exciting at the time, but that excitement would soon turn into frustration as the studio kept fiddling with new ideas and never reaching any conclusion.

Reports surrounding the development of Anthem paint an extremely bleak picture of BioWare Edmonton. While new mechanics were being added to the game at a consistent pace, things never quite worked well with each other, and the team had to redesign other mechanics to create something that would eventually shape up into a fun game. Over on the narrative side, the game was going through constant rewrites so as to keep the world and lore in sync with the changing development plans. At the same time, developers on ground zero also struggled miserably – having to work with the Frostbite Engine, which is EA’s infamous in-house engine.

As the team struggled behind closed doors to create a cohesive product, Anthem had already spent almost 4 years in pre-production with little to show for it. Then came E3 2017, where the team showcased a brief gameplay slice of Anthem. The game looked damn promising and fans were undeniably stoked to try it out, but the demo was mostly smoking mirrors; a hacked-out build that contained early concepts many of which wouldn’t translate over to the final game. 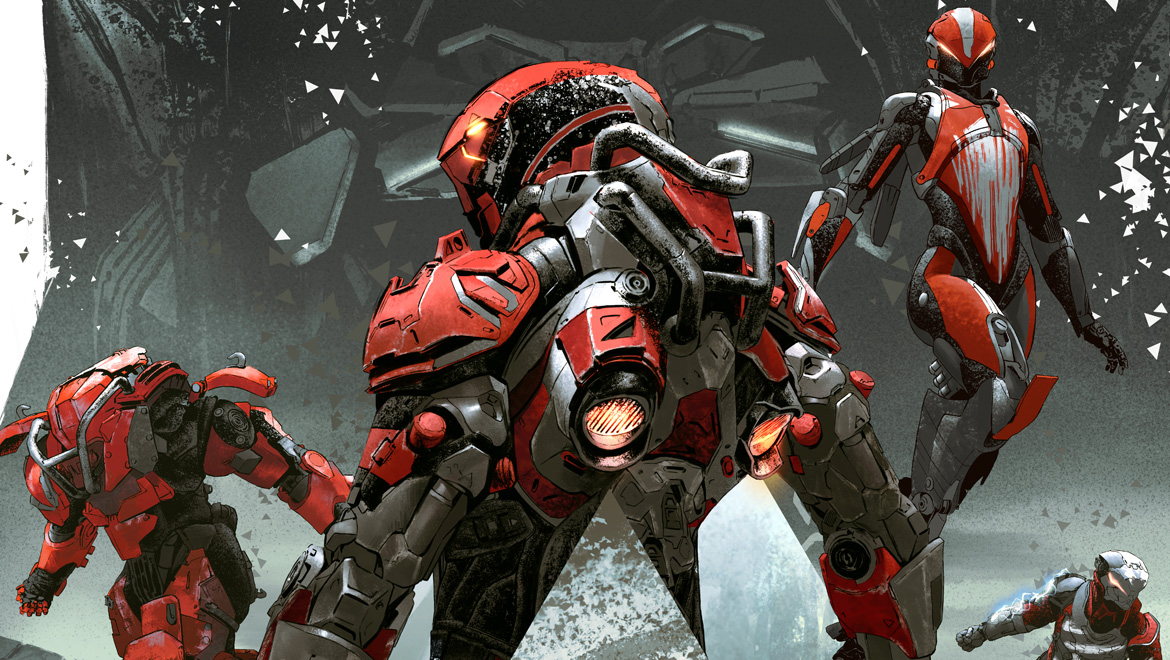 So while Anthem enjoyed a good first public reception, the team over at BioWare was fighting an uphill battle for creating the game. Even as the team switched over to full-production, there wasn’t any clear vision of what the game would be. Since many of Anthem’s original ideas didn’t stick to the landing, elements from contemporaries like Destiny and The Division would be borrowed – which left the ability to fly through environments as Anthem’s sole distinguishing factor.

As the game’s release date of February 2019 was nearing, BioWare took upon long periods of brutal crunch as they tried to craft levels, implement progression, and record motion capture all in the span of a few months. EA even deployed additional personnel from other studios to help finish Anthem, but that extra manpower didn’t amount to much in the face of the game’s ever-changing plans. With seemingly no end to this turbulent and elongated development cycle, many key officials and developers left the studio in search of greener pastures – leaving the game in a state of complete distraught.

Anthem would then finally release on February 22, 2019, and was immediately lambasted by critics and fans alike on account of its disappointing story, repetitive missions, and grind work associated with progression. As of the time of writing this feature, Anthem stands at a rating of 59 on Metacritic – which is the lowest amongst all games developed by BioWare.

By all accounts, this was not the Anthem that EA promised with its pre-release hype and marketing. While this negative reception must have left like an imminent train wreck for the developers at BioWare, this underbaked package came as a shock to fans who had high hopes for the game. Anthem felt like a game that had a lot of potential as its core gameplay was solid enough, but everything surrounding that pillar was unpolished and unsatisfying which made for a frustrating experience. A narrative quickly developed that EA had forced BioWare to create a live-service game and subsequently rushed Anthem out the door, and while that isn’t entirely false – it isn’t the complete truth either. Of course, the fact that BioWare’s prior release Mass Effect: Andromeda also flopped on a critical level contributed to this narrative.

But despite the negative public reception, EA promised fans that Anthem would be worked upon – and its many criticisms would be addressed via meaty post-launch updates. EA’s at-the-time reputation didn’t amount to much, but because Anthem was a live-service game with some promising elements – fans were still hopeful that the game’s fates could be changed for the better. After all, many of Anthem’s contemporaries such as Destiny and The Division had accomplished similar feats – so surely EA could do the same too.

Updates after updates passed that ironed out Anthem’s smaller issues while adding some content to the mix, including the much-anticipated Cataclysms update which would add three new acts to the game over a period of multiple weeks. But before Cataclysms could be released in full, BioWare and EA dropped the plans and instead shifted to seasonal updates to add new content to the mix. As one can already deduce, BioWare still hadn’t figured out what Anthem needed to be in order to become successful. Then came 2020 wherein EA would promise to carry out major reworks to Anthem’s progression systems and content offerings, and the initiative was dubbed as Anthem 2.0.

Months passed with little to no updates on the matter except for the odd reassurances, and Anthem 2.0 was being hotly anticipated by devoted fans of the game. But those hopes would be shattered away in 2021 as BioWare put the final nail in Anthem’s coffin by announcing that it would halt any and all work on Anthem and the rework initiatives have been dropped as the team shifts its focus to the next Mass Effect. The only silver lining to this announcement is that developers were relieved of the extra stress during the COVID-19 pandemic, which made development even tougher in the absence of any real communication and collaboration between teams.

So while Anthem’s rise was only visible to fans with no information about the happenings inside the studio, BioWare had to undergo an exhaustive development cycle with no light at the end of this very long and dark tunnel filled with mismanagement and technical problems. Thankfully, EA seems to have taken the turbulent development of Anthem as a cautionary tale, and seems to be making efforts to make its studios crunch-free and more flexible in terms of the tools developers are using to create their games. Case in point, the next Mass Effect is reportedly being built using Unreal Engine 5 instead of the publisher’s in-house Frostbite Engine.