CD Projekt RED has promised lots of information on Blood & Wine, the next expansion for The Witcher 3: Wild Hunt, this month but it seems that we may have a release date.

Many users revealed that a release date for May 30th had been unveiled on Steam. As per Wario64 on Twitter, a screencap (below) clearly shows the listing and release date. Of course, the page has since been pulled so it’s possible that someone pushed the button too early.

Blood & Wine is slated to be quite likely the largest expansion CD Projekt RED has made for any of its games till date. It will feature a brand new region, a new story wrought with twists and turns and new missions possibly involving vampires.

What are your thoughts on Blood & Wine releasing this month? Let us know your thoughts in the comments below and stay tuned for official comment from the developer. 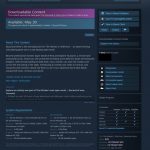