Posted By Shubhankar Parijat | On 04th, Jun. 2016 Under Article, Reviews

As soon as you start playing The Witcher 3’sBlood and Wine expansion pack, you get the feeling that even though the base game is still the same as what has come before, almost everything else is different. Tonally, in terms of its writing and in terms of the visual style the game crafts for itself- among other things-Blood and Wine carves out an identity of its own, completely independent of the base game and the Hearts of Stone DLC, so much so that developers CD Projekt RED could have easily launched this expansion pack as a separate game in the series altogether.

Within the very first fifteen minutes, you leave behind the gloomy, brutal landscapes of The Witcher 3 and enter an entirely new area, one that is unlike anything you’ve ever seen in this series. Gone are the boggy swamps of Velen, gone the urban mess known as Novigrad, and gone are the stark, grim mountains of Skellige. Blood and Wine takes you to Toussaint, an area that is particularly French in its flavours and styles. Toussaint is full of beautiful vineyards, scenic landscapes and grand palaces and estates. The sun shines bright here, the people are chippy and chivalrous and there’s an overall undercurrent that is much happier than what fans of the series might be accustomed to.

"Within the very first fifteen minutes, you leave behind the gloomy, brutal landscapes of The Witcher 3 and enter an entirely new area, one that is unlike anything you’ve ever seen in this series."

The region of Toussaint might be the best thing about all of Blood and Wine. It makes a complete break from The Witcher 3’s base game in the boldest way possible, and it’s for the better. After hours upon hours of the base game’s stark, brutal tone, Blood and Wine feels like a breath of fresh air.

However, don’t take any of this to mean that Blood and Wine forgets what made The Witcher 3 so damn good in its first place, with its tense atmosphere, dark humour and sharp writing. Toussaint is beautiful to look at and a ride through the vineyards is more pleasant than you can imagine, but this is still, at its heart, a Witcher story, and it comes with all the dark imagery and morbid fantasy you would expect.

The tale the expansion pack tells is a captivating one, if not for the narrative itself as much as it is because of its strong cast of characters. Veterans of the franchise- especially those who are familiar with the books- will recognize a few key characters here and there, and each of them is written with the same kind of expert precision that made the likes of the Baron and Yennefer so good in the base game itself.

Carrying on with the improvements the Hearts of Stone DLC made to the game’s combat, swordplay in Blood and Wine is fast-paced, thrilling and intense. Boss fights require you to study the enemies’ movements patterns carefully, and you’ll be as good as dead if you cannot perform quick dodges and rolls to get out of the way of their deadly attacks. Potions, bombs and oils are sure to give you the edge in any kind of a battle, but the thing that really changes the combat for the better in Blood and Wine is the addition of mutations. These mutations give you some interesting bonuses in the middle of battles, and also add new skill slots, and both these things come in very handy in the thick of a battle, even if they ultimately make the game a bit of a cakewalk, especially near the final stages of the story. 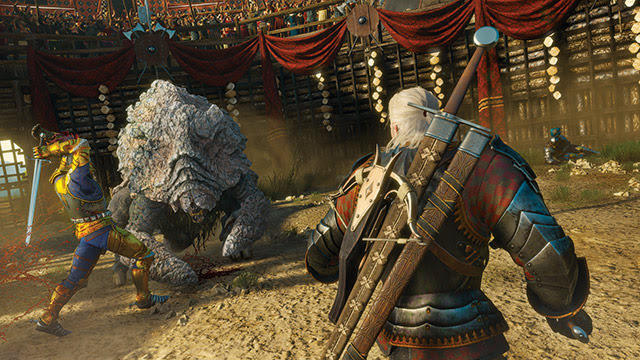 "The tale the expansion pack tells is a captivating one, if not for the narrative itself as much as it is because of its strong cast of characters."

Another major addition in Blood and Wine is the ability to manage an entire estate. In the opening hours of the expansion pack, Geralt becomes the owner of a vineyard that has been falling into decay, but is still a beautiful location and has the potential to become a wonderful retirement home for the old witcher in the future. The purpose of this estate, more than anything else, is to give Geralt a loving, peaceful sendoff. But in truth, when you really get down to it, that’s the purpose of all of Blood and Wine.

It’s surprising to see how well Blood and Wine manages to strike a perfect balance between The Witcher’s typical stark, somber atmosphere and it’s newfound in-your-face sense of humour. It shows just how well CDPR can tell a strong story, and that they do not have to rely on dark tones and grim characters to do so.

The Witcher 3’s final expansion pack benefits greatly from leaving behind the original game’s general feeling of melancholy and doom and gloom, and embraces its new ebullient atmosphere in the most wonderful way possible. It’s the perfect sendoff for The Witcher as we know it, and if this is Geralt’s final foray in this celebrated RPG franchise, then we as fans can all be satisfied with his send-off.

Humour can seem a little goofy at times; Unchallenging combat.

Blood and Wine is every bit as good as you would want Geralt’s final adventure to be.

A copy of this game was provided by developer/publisher for review purposes. Click here to know more about our Reviews Policy.
Tagged With: CD Projekt RED, pc, ps4, the witcher 3: blood and wine, The Witcher 3: Wild Hunt, Xbox One