Check out the apparent goodies coming with the Collector’s Editions.

Respawn Entertainment’s Titanfall 2 will be receiving a Standard and Uber Collector’s Edition according to listings by an online retailer.

Both editions will feature a custom Shemagh scarf (which Frontier Militia pilots would often don), a pilot ID card flash drive (which contains content, likely for DLC), exclusive memorial patches and a pilot field journal with the base game. The Standard Collector’s Edition includes a Light-up Pilot Bust along with a mini-art print set and paracord survival bracelet while the Uber Collector’s Edition includes a replica Pilot helmet and tactical helmet accessories like a tactical flashlight and targeting laser sight.

The box art was also revealed and it seems to be in line with the Redditor who noted that the left side of some concept art would be the box art. Makes you wonder what else was right about what he said.

Titanfall 2 will be showcased during EA Play on June 12th and releasing between September and November on Xbox One, PS4 and PC. 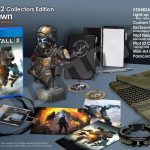 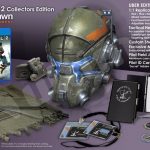