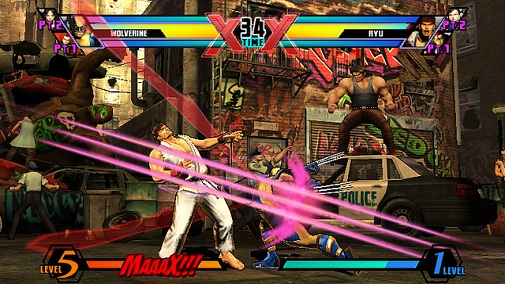 Ultimate Marvel vs Capcom 3 is a great showcase of the PS Vita’s capabilities. The content is basically same like its PS3 brethren, but there are a lot of new control mechanics, and the general novelty of playing this on a portable device with colours popping out, is one of the greatest experiences of this gen.

The game was released alongside the PS Vita in December when the hardware launched in Japan, and this version which was reviewed is the EU one. Of course, the main question here is obviously regarding the Vita’s controls. Is it too fragile for this game, or quite adequate? I’ll go with the latter. The addition of a fantastic d-pad really enhances the gameplay, and the lack of L2 and R2 buttons aren’t missed here.

I reviewed the PS3 version last year as well, and its basically the exactly same game – minus a few graphical downgrades. Oh, no need to be alarmed here. The game looks gorgeous, and the downgrades I was talking about were the applied to the backgrounds mostly, and the omission of some minor graphical effects aren’t really that significant. The game looks absolutely fantastic on the portable device. 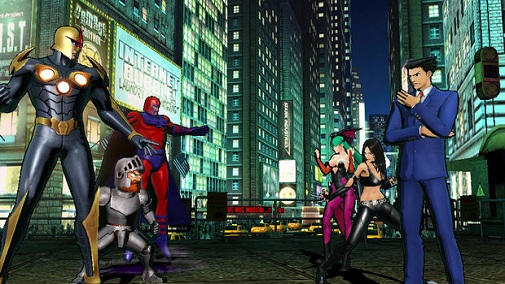 You will be pleased to know that the game runs at 60 fps. This makes the combat extremely enjoyable, and for fighting games I wouldn’t settle for anything less. It was a great decision to stick to that framerate, considering it’s a launch title, and there is absolutely no doubt in my mind that second gen Vita titles will look even better due to enhanced optimizations.

The roster is solid just like its PS3 counterpart, and the three vs three tag team gameplay maintains to retain its charm. My choicest team was – Firebrand, Ryu and Frank West. There are a lot of Marvel characters available too. Iron Man and the rest of the Marvel gang look as solid as ever. You can also play online, but as usual I managed to get my ass kicked. The netcode is smooth and you really don’t have to worry about lag here.

When you look at the console versions, netcode is one area where Capcom has done the majority of improvements. Marvel vs Capcom 3 had a lot of lag issues online, which was reduced a bit in the Ultimate version, and the Vita version is the best one yet. 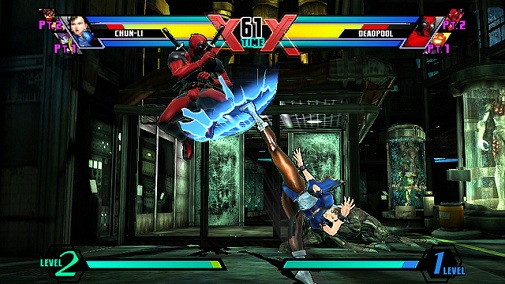 The PS Vita has a lot of online functions that the PS3 doesn’t, namely party chat, and considering the fact that microphone is in-built in every Vita – the online mode is a lot more fun on the Vita than the PS3. Although, it’s a lot less competitive due to obvious reasons.

You can use Vita’s touch functions to execute combos, and I really don’t know why anyone would bother with that. It’s a temporary novelty at best. I massively prefer the traditional control inputs, as they’re quite good on the Vita. If you want a great fighting game on the Vita, then you can’t go wrong with Ultimate Marvel vs Capcom 3. Capcom has done a good job with this version, and hopefully they’ll provide a lot of content support in the future to bolster the game.

If you own the PS3 version as well, it's hard to recommend the game since it's basically the same. Should have shipped with new content. Online community needs to grow.

Final Verdict:
GOOD
If you want a great fighting game on the Vita, then you can't go wrong with Ultimate Marvel vs Capcom 3. Capcom has done a good job with this version, and hopefully they'll provide a lot of content support in the future to bolster the game.
A copy of this game was provided by Developer/Publisher/Distributor/PR Agency for review purposes. Click here to know more about our Reviews Policy.