Get in on the extra content for Ubisoft’s open world title. 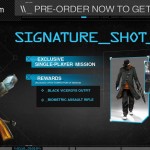 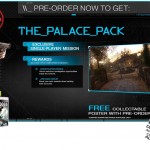 For those who pre-order from GameStop, you’ll be able to receive The Palace Pack, that enables an ATM hack boost for increased money when hacking bank accounts, investigation bonus for more opportunities to investigate within the network and an extra single-player mission along with an exclusive poster.

Amazon pre-orders will grant the Signature Shot Pack, that includes a single-player mission for unlocking the Biometric Assault Rifle and Black Viceroy outfit. The weapon works by imprinting, so it can only be used by the first person who touches it. Naturally, Aiden Pearce is going to make sure that isn’t the bad guys.

Watch_Dogs is set to release on November 19th for Xbox 360, PS3, PC and Wii U, as well as launching alongside the PlayStation 4 (with extra content developed specifically for the console) during the Holiday season.