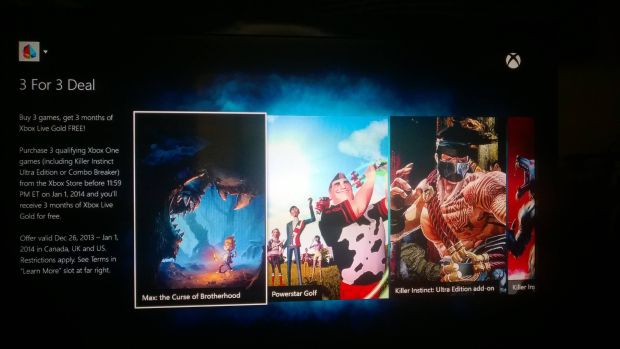 Microsoft is running an offer on Xbox Live for the Xbox One, offering a three month Gold subscription for free if you purchase three games.

There’s a catch or two. The qualifying games include Crimson Dragon, Killer Instinct (both paid packs), Lococycle, Powerstar Golf and Max: the Curse of Brotherhood. So it’s not a case of just picking up Dead Rising 3 or Forza 5 or even Peggle 2 and taking advantage of the offer. No, you unfortunately have to go for the lesser games. You’ll also need either one or two of the qualifying games listed to be eligible.

As of now, the offer applies for the UK, United States and Canada. It’s valid from December 26th to January 1st. Simply head to the third title under “Featured” on your home screen to check it out. Does it sound like a decent deal or just a way to offload some games? Let us know what you think below.