Next gen ain’t cheap by a long shot. 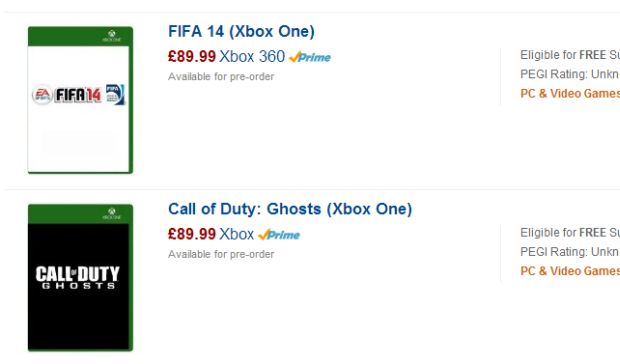 We’ve already seen placeholder prices for Microsoft’s Xbox One shot straight up to $899 on EB Games Australia, with controllers priced at $99. Could the prices for games – even if they are just placeholders – be any worse? Yes they can, judging from what a Reddit user just found.

On Amazon.UK, Xbox One games are currently up for pre-order. The two titles showcased most prominently after the console itself are FIFA 14 and Call of Duty: Ghosts, which go for a not-so cool £89.99. That’s $136 USD per game. Seriously.

But remember, these are placeholder prices. It could be possible that games end up costing £60 instead. Regardless, that’s still more than $90 USD for a single Xbox One title. And we honestly doubt that they’ll be priced the same games are currently (the Xbox 360 version of Ghosts, for instance, is available for £40 on pre-order).

What are your thoughts? Is the sky falling for Microsoft’s next gen console before it’s even released, or is it all just over-exaggeration?

Tagged With: amazon uk, Microsoft, next gen consoles, Xbox One