Arkane Studios have revealed their next big game, and Redfall is looking like their biggest project ever. Here's everything you should know about it.

Xbox’s E3 show was packed from beginning to end, and they wisely decided to close out the show on an appropriately high note. Arkane Studios’ Redfall was the last new game to take the spotlight, and though the announcement trailer was purely cinematic, plenty of details on the game have been revealed since then, and in the trailer itself. Here, we’re going to talk about the ten biggest details you should know about Redfall.

Redfall takes place in the titular island of, well, Redfall. Once a quaint town, the island has been taken over by a legion of vampires, who’ve not only entirely cut off the island from the outside world, but have also blocked out the sun. As the vampires start bleeding the town dry, consuming the blood of most and recruiting a few to their own cause, you play as one of the few remaining survivors. Redfall will task you with heading out into the town with your vampire-slaying team and taking down enigmatic foes one-by-one. 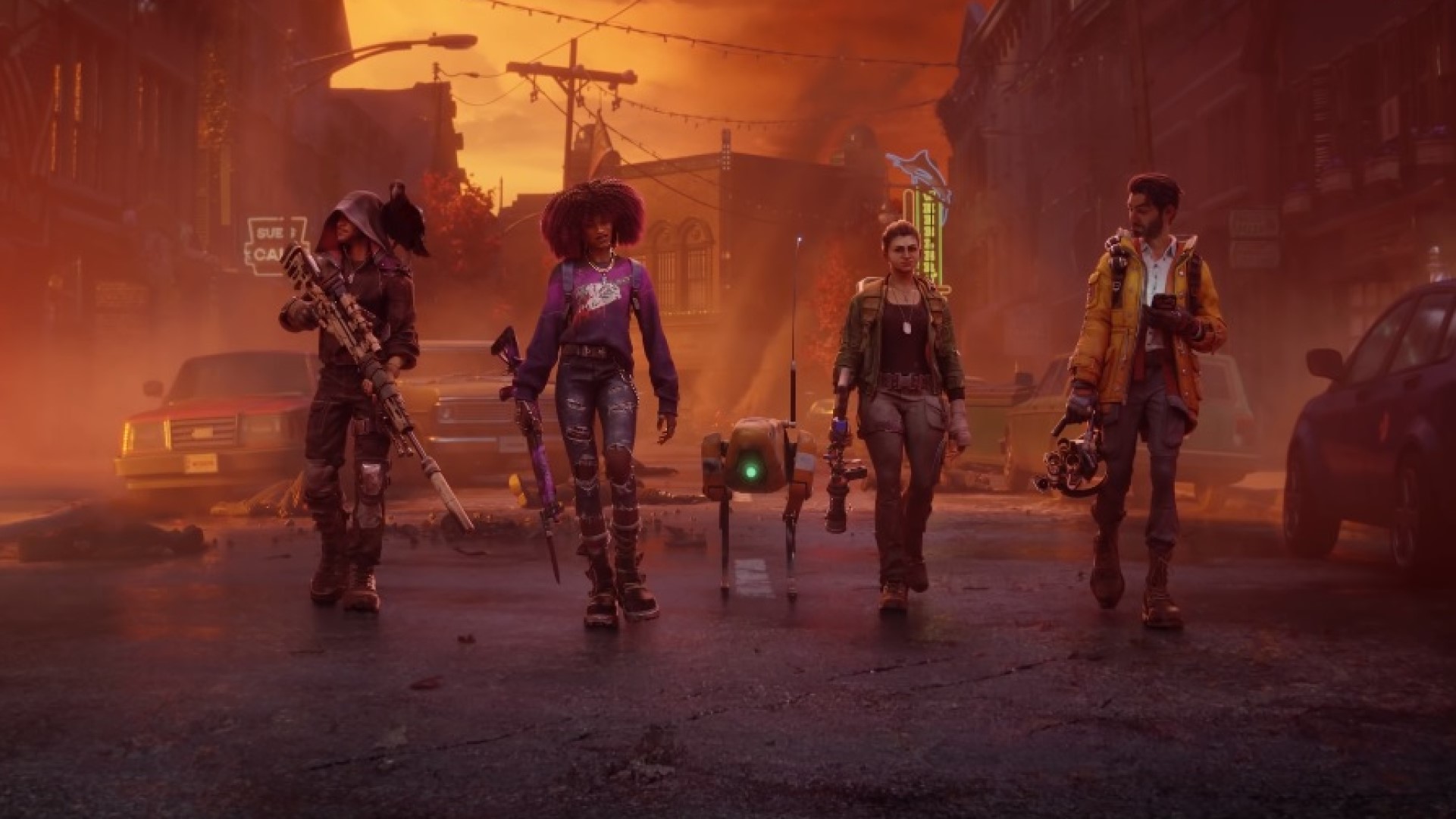 The big hook here is that Redfall is an open world game, which is a bit of a departure from what Arkane usually does- but that’s not the only big hook. Redfall is also a co-op game, unlike the purely single player experiences the studio has typically put out with Dishonored and Prey. Players will be able to play as one of the four main characters we saw in the reveal trailer and team up to fight against vampires. Meanwhile, those who prefer solo play need not worry- you’ll be able to play the entirety of Redfall by yourself. So if you’re in it just to explore the world and mess about with the systems on your own, you’ll have the freedom to do just that. 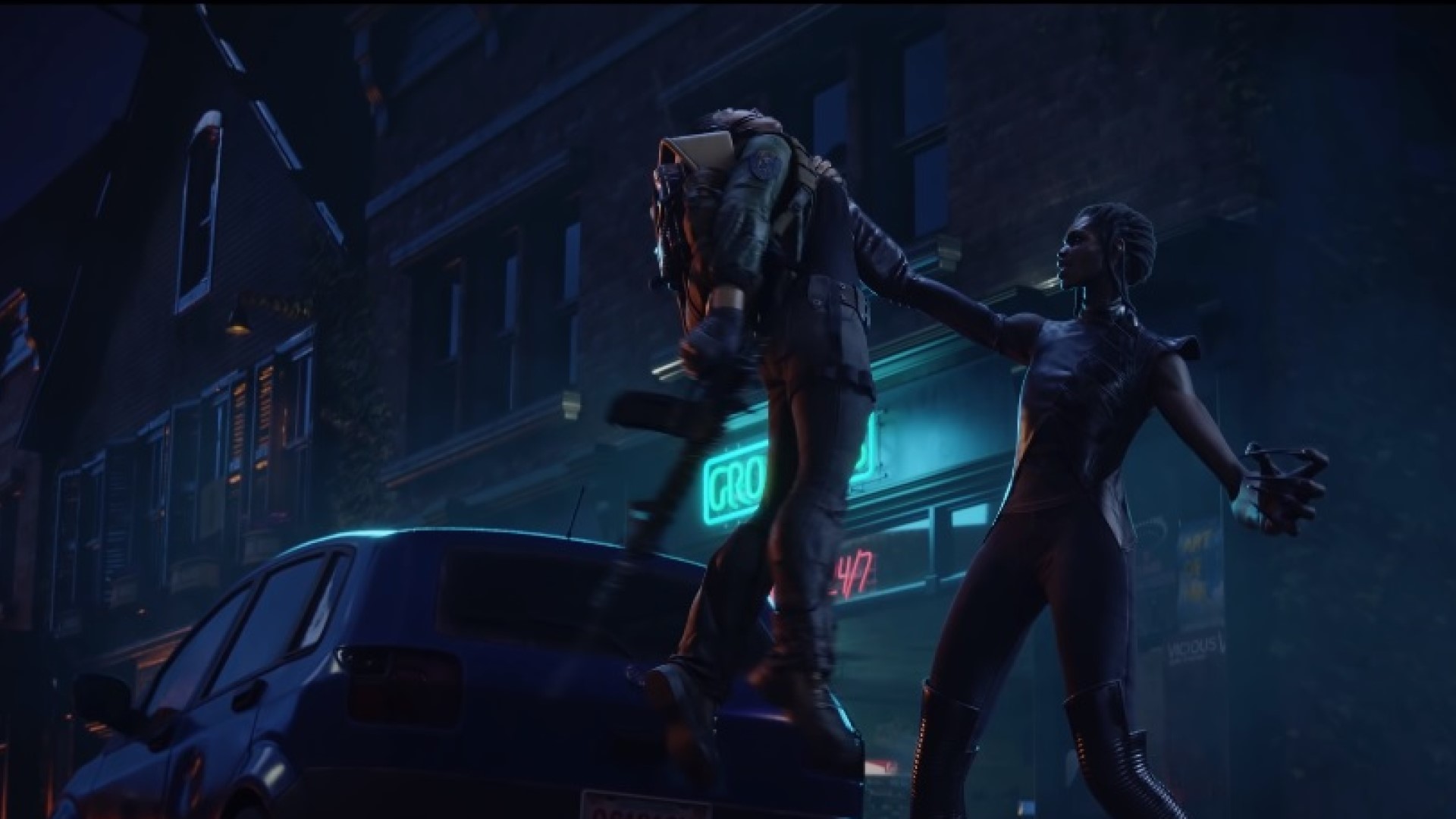 The fact that Redfall is a co-op open world shooter has made a few people skeptical about it. Arkane has a very particular style and design ethos, with systemic gameplay and player freedom being of paramount importance in immersive sims like Dishonored and Prey. How does that translate to an open world shooter that can be played co-op? Well, Arkane seems confident they’ve done just that. “It’s not the same as just any four-player co-op shooter,” said Bethesda SVP of global communications Pete Hines to IGN. “It’s doing a lot of things that Arkane is well known for and has spent the last 20+ years refining and honing and get really good at and I’m super excited for folks to see more of Redfall and what it’s doing.”

Meanwhile, co-creative director Ricardo Bare said on the official Bethesda website: “Every game we make is a little different for the last. Dishonored featured stealth. Prey leveraged tons of physics-related gameplay. Mooncrash introduced rogue-like elements. Despite those differences, in every case our focus remains on deep world building and inventive game mechanics. The same will be true of Redfall.” 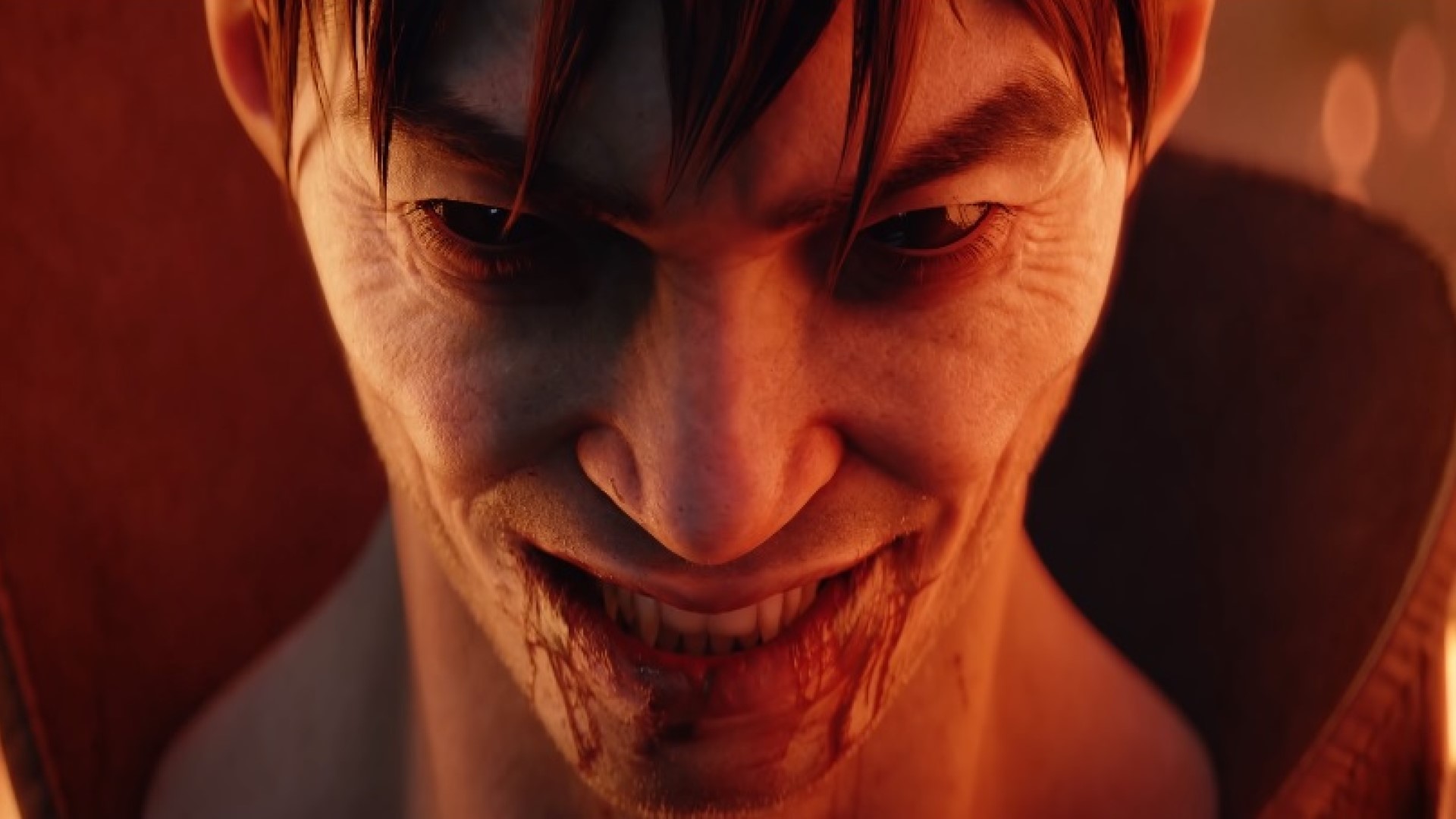 But enough about all that. Let’s talk about the stars of the show in Redfall, which are the vampires, of course. Though these vamps are going to be incredibly hard to kill, Arkane is promising vampires that are quite unique from what you’d usually expect. “Redfall’s vampires aren’t your typical bloodsuckers,” the developer says. “They were created after a scientific experiment went horribly wrong, and they’re continuing to evolve.” Vampires can each have different kinds of powers, with one shown off in the trailer being the Angler, which can use a psychic harpoon to drag you away from your team. In an Xbox Wire post about Redfall, it is explained that these vampires were once “normal, greedy people” and were “so obsessed with the idea of eternity that they used science to turn themselves into monsters.”

Says co-creative director Ricardo Bare: “Vampires are perennially fun, classical villains, because they’re ripe for every generation to reinvent and experience in a new light. In our case, Redfall vampires are science-inspired, triggered by biotech longevity experimentation.” The post also goes on to explain that the vampires are now “building an army” and that “there’s a clear hierarchy of power” amongst them. The post concludes: “These vampires are getting stronger and stronger as they grow their numbers and you’ll need to ascend a ladder dripping with blood in order to reach the creatures at the top that started it all.” That might suggest that players will spend the campaign climbing up that ladder and slowly coming against more powerful threats, as you try and get to the very top and kill their leaders. 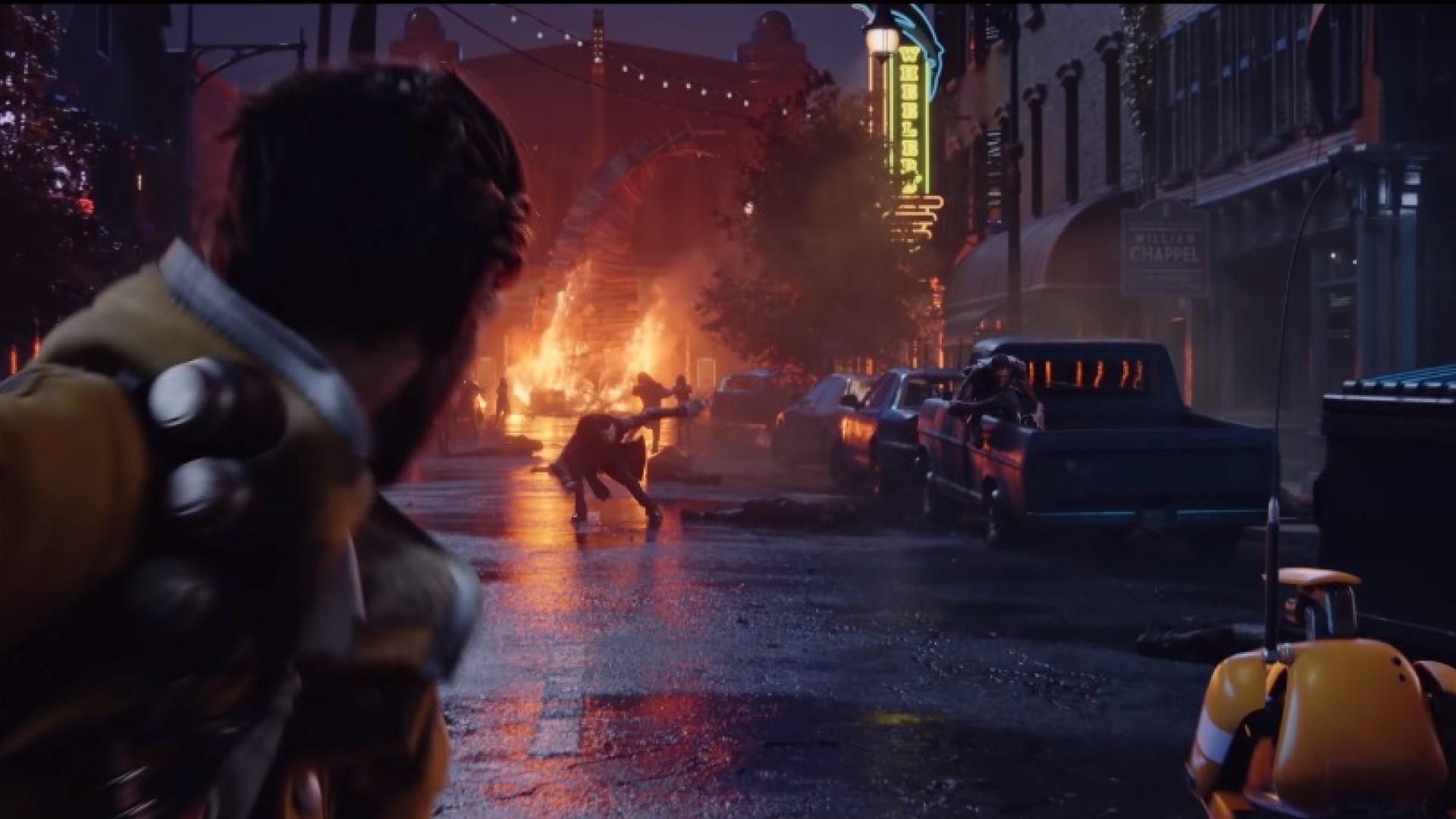 Vampires aren’t the only enemies you’re going to be taking on in Redfall. While the vamps rule the town come night, during the day, it’s controlled by cultists, hoping to join their ranks one day. Cultists have set up outposts across the island in Redfall, and players will be clearing these out in the open world and “make that area a little safer for human survivors.” That’s interesting for several reasons. For starters, these outposts could be excellent ways for Arkane to flex their design muscles in tighter, more packed environments in order to deliver more of what their fans will be familiar with. Meanwhile, the fact that you’re going to fight cultists by day and vamps by night would suggest that there’s a day/night system in place- though given Redfall’s open world nature, that’s sort of expected. But is the day/night cycle in the game’s open world going to be handled along the lines of what Dying Light does? It would certainly make a lot of sense, thematically at least. 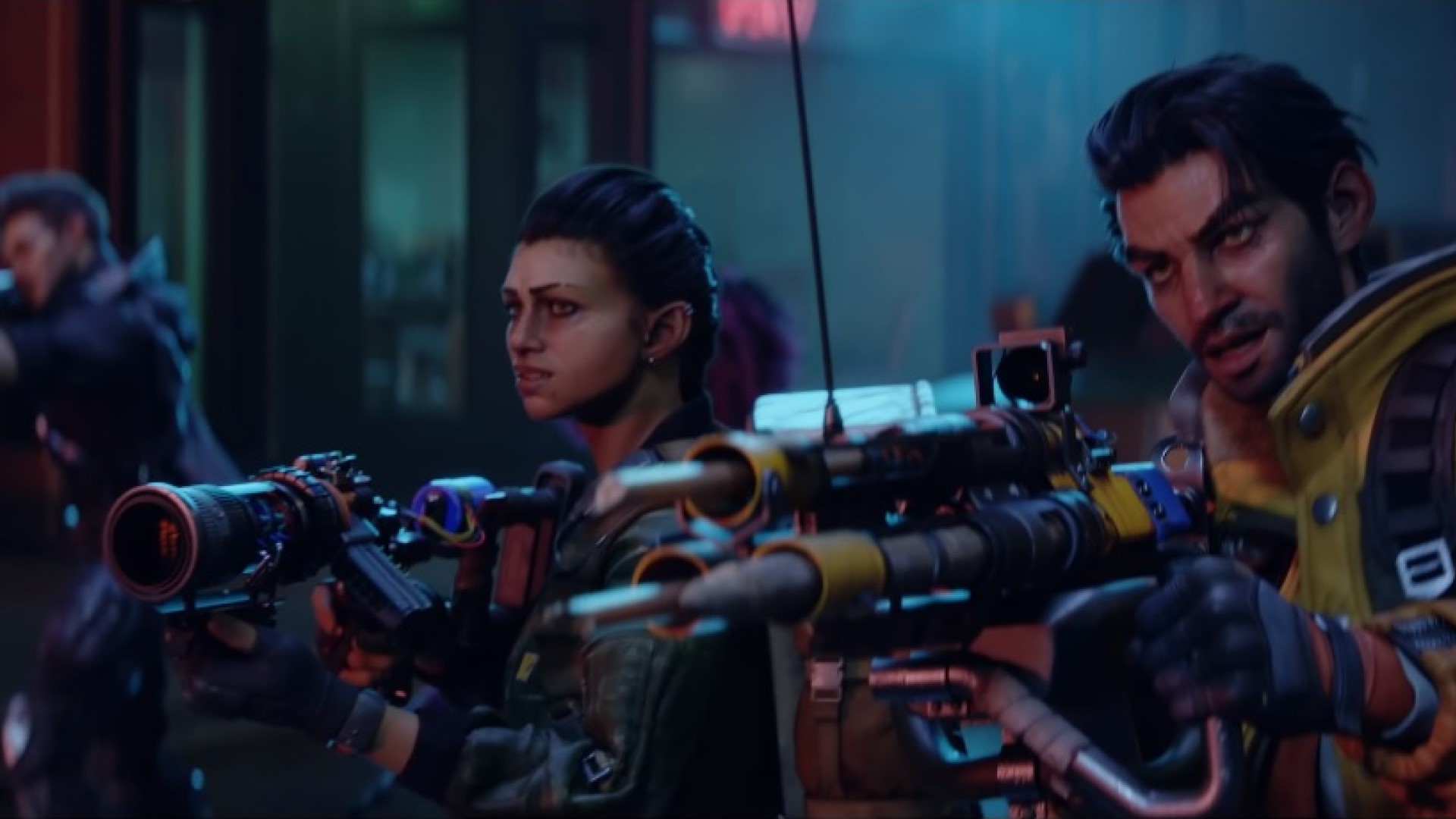 Redfall is focused on four characters, each of whom is going to be an important part of the story, especially thanks to the whole dynamic of the group this game seems to be emphasizing so much. But they’ll all also going to have very different gameplay roles. Take Devinder Crousley, for instance, or Dev, who’s described as “an internet-famous paranormal investigator, amateur cryptozoologist, and aspiring inventor.” Remi de la Rosa, on the other hand, is a combat engineer who was once part of a Navy rescue unit and has “lived her life on the frontlines of conflict, using her brilliant mind and strong sense of empathy to protect her loved ones and help those in need around the world”.  Oh, and she also has a robot sidekick. 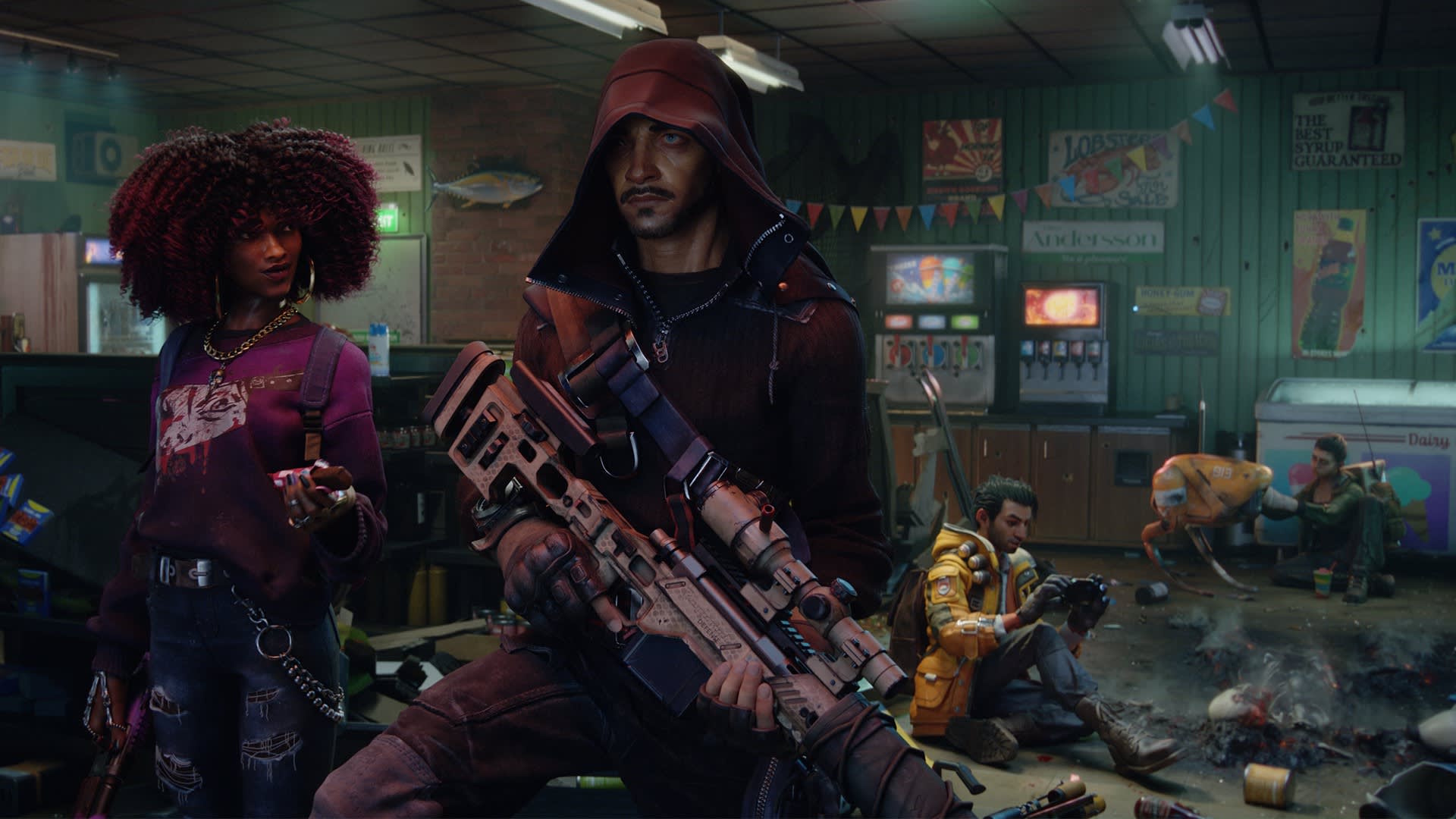 And what about the other two characters? Jacob Bowyer is an ex-military sharpshooter who was sent to Redfall with an elite special unit just before the island was cut off from the outside world. Arkane teases that after “dark circumstances separated him from his platoon”, he was forced “down a rogue path.” He has a mysterious vampiric eye that he uses to hunt down foes with supernatural precision, and also has a raven companion, somehow? Finally, there’s Layla Ellison, who is the youngest member of this team of vampire hunters, but makes up for her lack of experience with telekinetic powers. 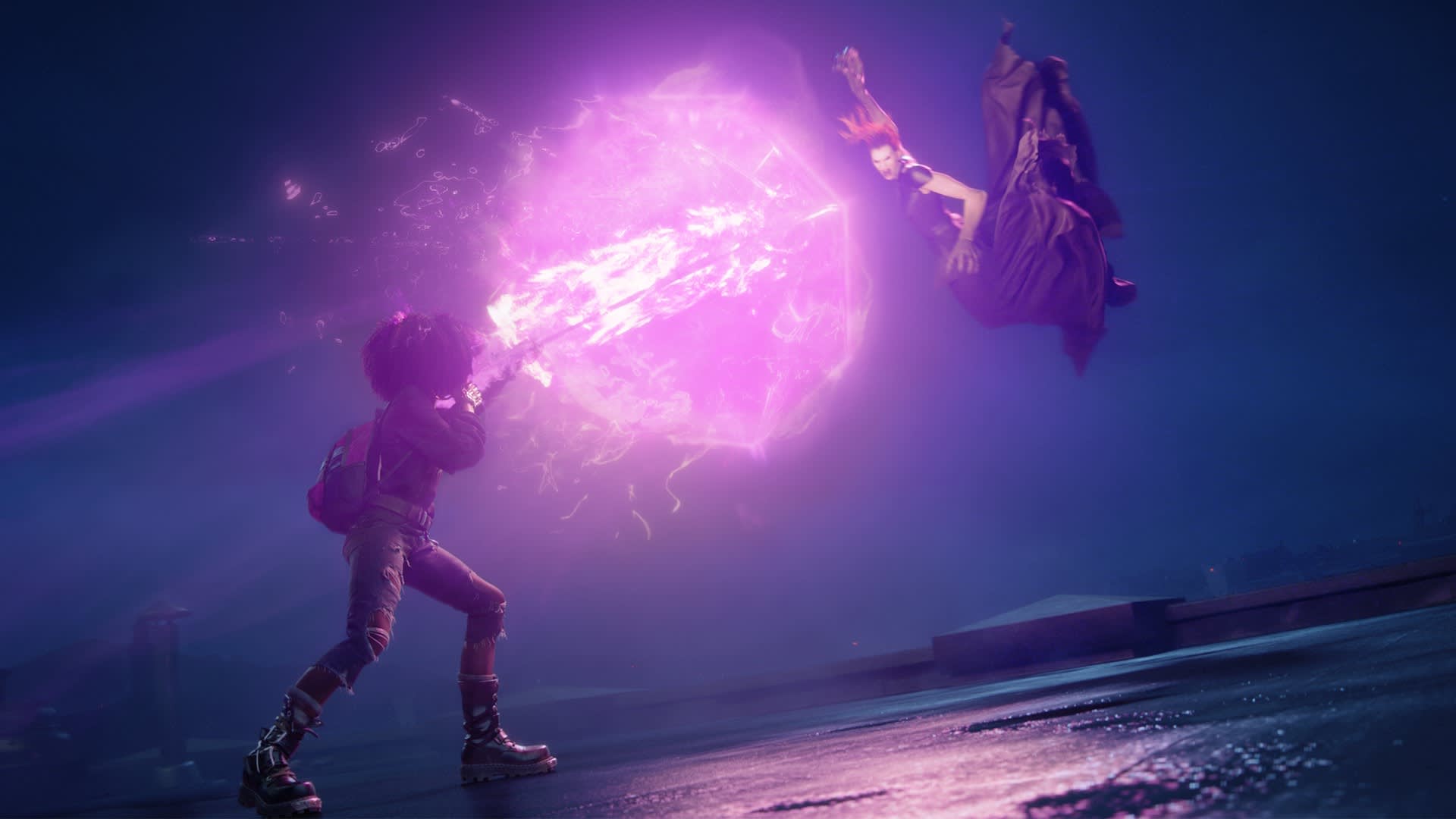 What’s exciting about having these four wildly different characters together in Redfall is the potential ways they can dynamically interact with each other during gameplay. Redfall’s reveal trailer certainly seemed to suggest that using the powers of each of these different characters in conjunction and experimenting with different combos is going to be an important part of the game. We see Layla lifting Jacob up to a rooftop with her mind, from where he can then more easily pick off enemies using his sniper rifle. We see Remi turning a vampire to stone with a charged beam weapon of some sort, and then Dev firing at it with a stake gun to literally break it into pieces. Arkane says on game’s webpage: “Teammates can try different hero loadouts and combine their strengths to overcome the vampire legion and their brood of maniacal followers.” Of course, it remains to be seen exactly how this will be handled when you’re playing solo. 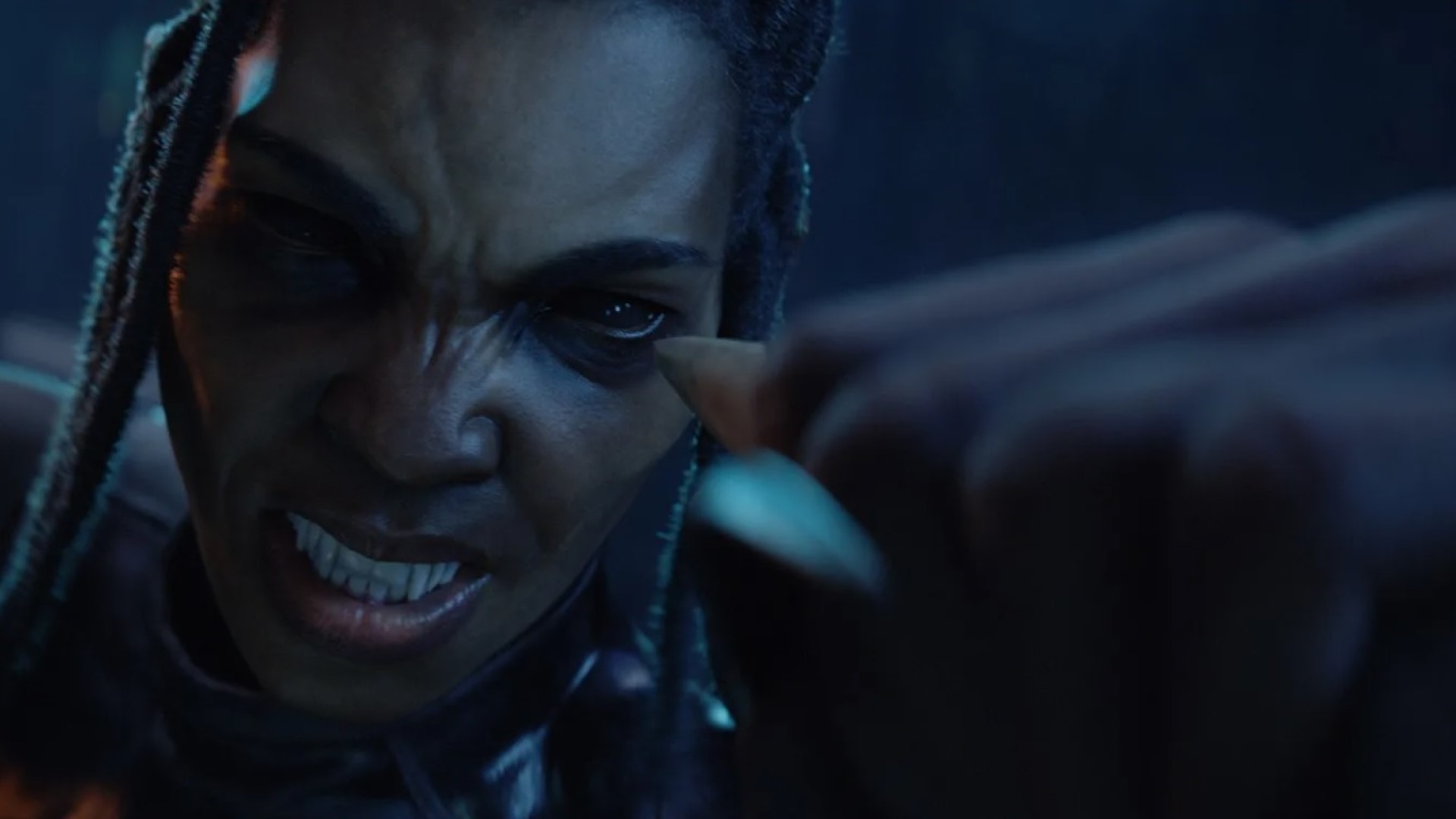 A few other scant but interesting gameplay details have also been revealed. Arkane promises that Redfall’s open world is going to adhere to their core tenets of interactivity and system depth, with the world reacting to players’ actions and choices. Players can also seek out new gear and weapons spread throughout the world, all of which is also going to be customizable. Meanwhile, the developer also says that while each character is going to have specific unique strengths and weaknesses, you will also be able to upgrade their abilities in a manner that suits your play style. 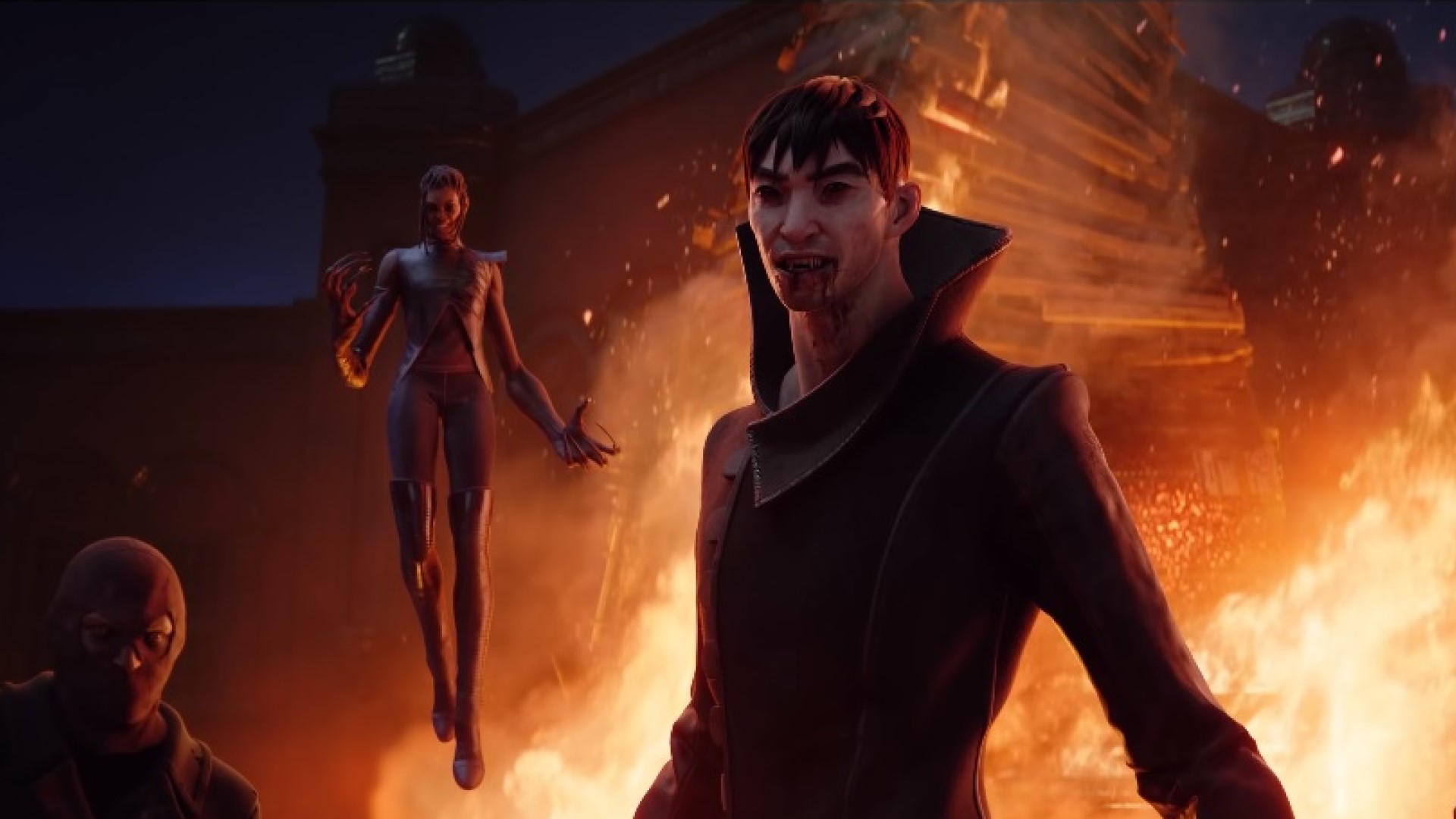 Redfall, unlike quite a few other upcoming Microsoft first party titles coming out soon, was not given a release date at E3 2021- well, not exactly. We do know that it is coming out in Summer 2022, about a year from now, so at least we have a narrow window. It’ll release on Xbox Series X/S and PC, and will also be available via Xbox Game Pass on console, PC, and cloud at launch, given that it’s a first party release. Thankfully, with some time still left before Redfall launches, we’re probably going to learn and see a lot more about it in the coming months.