4 Things Cyberpunk 2077 Can Learn From These 2 Games

Here’s what the upcoming behemoth can learn from these 2 fellow RPGs.

Posted By Shubhankar Parijat | On 22nd, Jan. 2020 Under Article, Feature

Cyberpunk 2077 is a game we have been looking forward to in some capacity for over half a decade, but that anticipation has gone through the roof in the last couple of years. Ever since the game’s re-reveal at E3 2018. Everything we’ve seen of the game since then has looked – you guessed it – breathtaking, and most seem confident that Cyberpunk 2077 is going to be an exciting step forward for the people that created The Witcher 3.

And while we’re excited to see what ideas and flourishes of their own CD Projekt RED will bring to the table when the game launches in September, there are some things that it can – and hopefully will – take away from fellow giants in the genre- games that have attempted similar things in different ways and done it really well.

FROM THE WITCHER 3 – ENVIRONMENTAL DIVERSITY

The Witcher 3’s world was a beautiful one to explore and traverse, and one of the biggest ways that world constantly kept players engaged with its environmental variety. From the swamps of Velen to the bustling streets of Novigrad, from the wintery mountainous Skellige to the isolated and forested Kaer Morhen- each area felt distinct, detailed, and alive.

Cyberpunk 2077 needs that, of course, as any open world game does- but Cyberpunk needs that in particular for one very simple reason- it’s all set within a single city. Night City and the Badlands surrounding it will be the entire map of the game, and so, having plenty of environmental diversity and ensuring that each district of the city feels unique from the others will be crucial for the game.

CD Projekt RED have confirmed that Night City will consist of seven areas in total, each having its own distinct identity and atmosphere- the Badlands in the outskirts, the gang-controlled Pacifica, the high-end Westbrook, its suburbs in Heywood, the corporate City Centre, the industrial Santo Domingo, and Watson, which is inhabited mostly by immigrants. It certainly feels like CDPR are devoting a lot of energy to ensuring that the city feels vibrant and varied, so we’re quite hopeful on this front.

FROM THE WITCHER 3 – REACTIVE WORLD

While The Witcher 3’s world is excellent from a visual perspective and how effective it proves as a backdrop for the game’s excellent world-building and story-telling, and impressive just for its sheer size, there is one area where it’s a bit lacking- it feels too static. Where the game’s story is constantly changing based on the players’ decisions, the world itself feels like it’s stuck in time.

Cyberpunk 2077 is a game that’s putting all its chips on immersion and on emphasizing player choice in more ways than one, and so, when it comes to having a dynamic and reactive world, it needs to look at The Witcher 3 and learn what not to do- or at least what to improve upon. CD Projekt RED need to make sure Night City feels alive and vibrant, as we’ve already discussed, and one of the ways they need to do that is by making the game’s world react to the player and their choices.

What the world needs is emergence based on systems- and it seems like that’s what CDPR are trying to achieve. The game’s wanted level system, or the ability to run over pedestrians with vehicles, or being able to purchase properties, or even the dynamic weather and day/night cycle all seem to collectively be hinting at a much more systems-driven world. Here’s hoping it achieves the sort of effect we’re hoping it will. 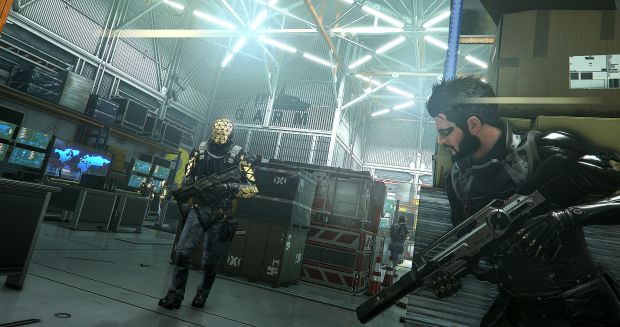 Combat is one area where Cyberpunk 2077 can learn plenty from both, The Witcher 3 and Deus Ex: Mankind Divided– both, of course, for very different reasons. There’s no question that combat in Cyberpunk 2077 needs to be much better than it was in CDPR’s previous game, so from The Witcher 3, it needs to learn – once again – what not to do. It needs to be engaging, have depth, and actually pose a bit of a challenge.

And given the similarity in setting and gameplay style to Eidos Montreal’s Deus Ex: Mankind Divided, one can’t help but feel like CDPR can take a lot of cues on how to handle combat from that game. Combat in Mankind Divided is all about options, allowing players to go lethal or non-lethal, allowing stealth, allowing other completely different solutions that might skip conflict altogether.

Cyberpunk 2077 needs to lean more in that direction- and thankfully, based on everything CD Projekt RED have said so far, it looks like that’ll be the case. It definitely seems like the developers are putting a lot more emphasis on player expression through gameplay than they have ever done in their previous games, and that’s probably going to be reflected in combat as well.

We’ve talked plenty about freedom of player choice in gameplay and in combat, and this sort of goes hand-in-hand with that- Cyberpunk 2077 needs to be driven by mechanical depth and systems that interact with each other to have gameplay full of possibilities and choices the way we’re hoping it will have.

Deus Ex: Mankind Divided achieved this pretty well, though on a smaller scale than what we’re hoping Cyberpunk 2077 will do. Mankind Divided’s Prague and Golem City, for instance, were both pretty small maps (especially the latter), and yet thanks to the game’s mechanical density (as well its narrative density) both areas felt packed- and there were always so many ways to accomplish any given task.

The Witcher 3, for instance, felt like a flat experience in terms of growth and change. Of course, that isn’t applicable in the slightest to the story, which was so massive in scope and so cognizant of player choice that it more than made up for any other deficiencies- but from beginning to end, The Witcher 3 relied on a very basic gameplay loop that didn’t change much throughout its log runtime. Hopefully, Cyberpunk 2077’s gameplay will provide enough depth and choices in customization and progression to players that it won’t end up suffering from similar issues.