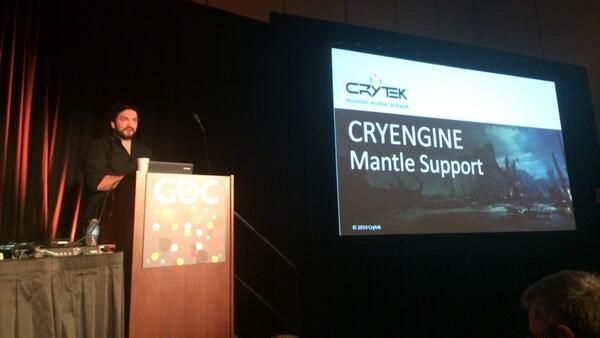 During the recent Game Developers Conference in San Francisco, Crysis developer Crytek announced that their in-house game development engine CryEngine was be supported by AMD’s Mantle API. This was recently revealed by EA Frostbite technical director Johan Andersson on Twitter, along with the above image of CEO Cevat Yerli on stage.

AMD Mantle has been touted for months now to improve overall gaming performance and development on PCs. Battlefield 4 was supplanted with an update to Mantle not too long ago, and it appears that future Crytek titles will benefit from the increased performance. Does it mean that Mantle could come to consoles if Crytek develops, say, a sequel to Ryse? Maybe not, but it does add some more power to the ever beast-like CryEngine.

What do you make of the announcement and AMD Mantle’s support for CryEngine? Will it be enough to counter Microsoft’s upcoming DirectX 12 reveal, especially given their Xbox One angle? Let us know your thoughts and opinions in the comments below.