Bioware is Confident About Dragon Age 3 – Not Worried About The Witcher 3, Dark Souls 2

Representative Blair Brown lays the smackdown on the official forums. 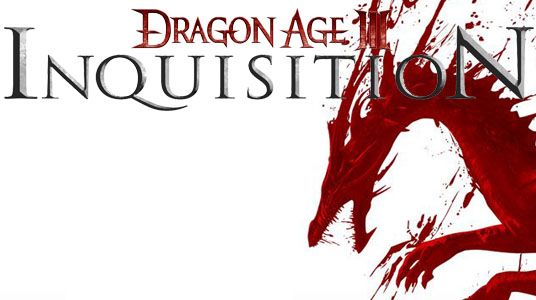 In a recent post on the Bioware forums, many fans began questioning whether the developer would be able to compete in today’s RPG market with the upcoming Dragon Age III: Inquisition. Especially considering that Dark Souls 2 and The Witcher 3 have been making headlines for their amazing graphics and gameplay features.

This caused representative (if that’s what he really is) Blair Brown to come out and state that “Dragon Age III will sold as ‘Dragon Age III’ not ‘hey look at us over here, we’re kinda like those other games’. The game is strong enough to stand out.” 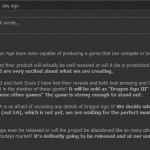 As for when we’ll be seeing the game and why EA is afraid to reveal any details, Brown stated that, “We decide when we are ready to reveal information (not EA), which is not yet, we are waiting for the perfect moment to blow everyone away. We are not afraid”.

One could be skeptical as to whether Brown speaks for Bioware, due to the number of typos in his post. Nonetheless, we’ll wait to play all three games before pronouncing which is better – which is subjective enough as it is.

(Thanks to NeoGAF for the image)