A look at the backer beta demo for Koji Igarashi’s next epic reveals a nostalgic yet fun new experience.

Kickstarter has been an interesting platform to follow over the years. It’s produced efforts like Moonlighter and Hollow Knight, original IPs which channel their respective genres (Zelda-like and Metroidvania) in great ways. Also, it’s generally given a strong base for developers like Larian Studios and inXile Entertainment to fund their projects. They aren’t all success stories though – some legendary designers took to the format to succeed their legendary IPs and didn’t quite get the job done. Mighty No. 9, the spiritual successor to Mega Man from designer Keiji Inafune, is one such tragic example.

With all that in mind, there’s some worry that Bloodstained: Ritual of the Night may suffer the same fate. If you haven’t heard, Bloodstained is developed by ArtPlay and DICO with Koji Igarashi as the producer and writer. Igarashi had a role in almost every single 2D side-scrolling Castlevania title since Castlevania: Rondo of Blood in 1993 (and in Castlevania Judgment as well but leave that aside for now). To say that he understands the Metroidvania format, let-alone how to make a great Castlevania game, is an understatement. Should Bloodstained: Ritual of the Night be held up under the spectre of Castlevania though? Or should it thrive as its own entity?

"That feeling of looking at the map and being overwhelmed yet excited at how much more is to come is a good one indeed."

I recently had a chance to play the backer beta demo for Bloodstained on the PC. The story began with an old-school rolling text screen and introduces us to Miriam. Adopted by the Alchemy Guild, Miriam suffered numerous crystal-binding experiments that turned her into a Shardbinder. The Guild would launch its own heinous acts on the public until it was eventually stopped. However, Miriam fell into a coma for 10 years instead of being killed by the experiments. She awakens when her comrade, another survivor named Gebel, begins to summon demons in another attempt to ruin the world. Thus will Miriam venture into the Demon Castle to stop him.

The game doesn’t start off at the Castle’s entrance or near it. Instead, Miriam and the alchemist Johannes are travelling by sea and must repel enemies (along with a boss) to reach the shore unscathed. Though the story-telling may seem heavy-handed at first, it does help establish the characters and their motivations in a solid manner. Once you enter the Demon Castle, the memories may or may not come flooding back.

For me, it felt like I never left. From that opening shatter to the lights suddenly coming on, the catchy orchestral rock, the variety of enemies inviting slaughter, the sheer level of detail in the backgrounds – Bloodstained: Ritual of the Night imbibes that feeling of Castlevania rather well. In fact, I feel it skirts a nice line between nostalgia and establishing its own identity. Even if the environment design isn’t breaking new ground, the joy of discovering a new area, finding sections that loop back into familiar places and requiring certain abilities to progress is still inherently fun. Looking at the map and being overwhelmed yet excited at how much more is to come is a good feeling indeed. 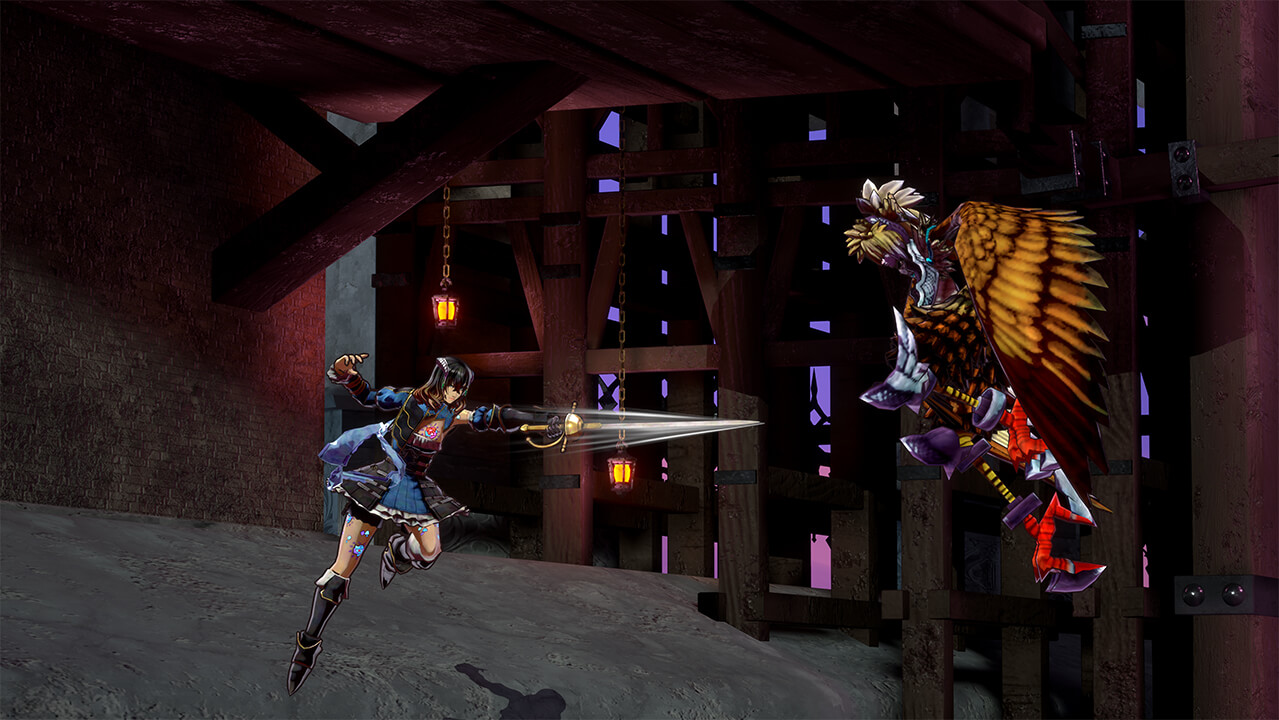 "Progression-wise, Bloodstained is giving you new weapons, Shards and items to play with at a healthy pace, adding further incentive to exploring all those nooks, crannies and cracked walls."

There’s plenty that will be familiar though. The Shards system, which is essentially the Tactical Soul system from Castlevania: Aria of Sorrow, allows players to kill enemies and equip Shards from their remains. These grant different abilities, from summoning a giant water tentacle to lash out at foes to firing arrows. Some Shards can also confer passive benefits like increasing damage with one-handed weapons. The addition of directional aiming adds a bit more depth to the combat but it’s still all about hacking and slashing. Firearms with unique kinds of ammo are also included to mix things up. If there are particular Shards you like, then some can be farmed to strengthen their potency. There is an element of danger though – if Miriam gathers too many Shards, then she could become corrupted. I never really saw it in action in the demo but I’m interested in the story-telling potential this could have (a la Sundered).

Other intriguing features include the crafting system for upgrading different weapons and Shards. It’s also possible to cook meals and upgrade your stats beyond just levelling up. This provides an extra layer to the backtracking – you may find a useful material when exploring the same section or killing the same enemies, thus leading to some bonus. If there was a wishlist option for certain materials needed in a meal or weapon, I’d be golden. It’s still too early to judge these systems, especially their mid- to end-game uses. But it is an option that I can appreciate in theory. Progression-wise, Bloodstained provides new weapons, Shards and items to play with at a healthy pace, adding further incentive to explore all those nooks, crannies and cracked walls.

The attack animations, ability to slide under objects and into enemies, breaking environmental objects for items and currency, back-stepping and even how some foes mechanically operate is very Castlevania-like. The feedback from the weapons is nice though it still feels like the combat could be ever so slightly polished. It’s still fun to go around, smashing foes with a Claymore or shooting flying demon pigs out of the sky. Movement is also responsive and natural, especially when attacking mid-air. 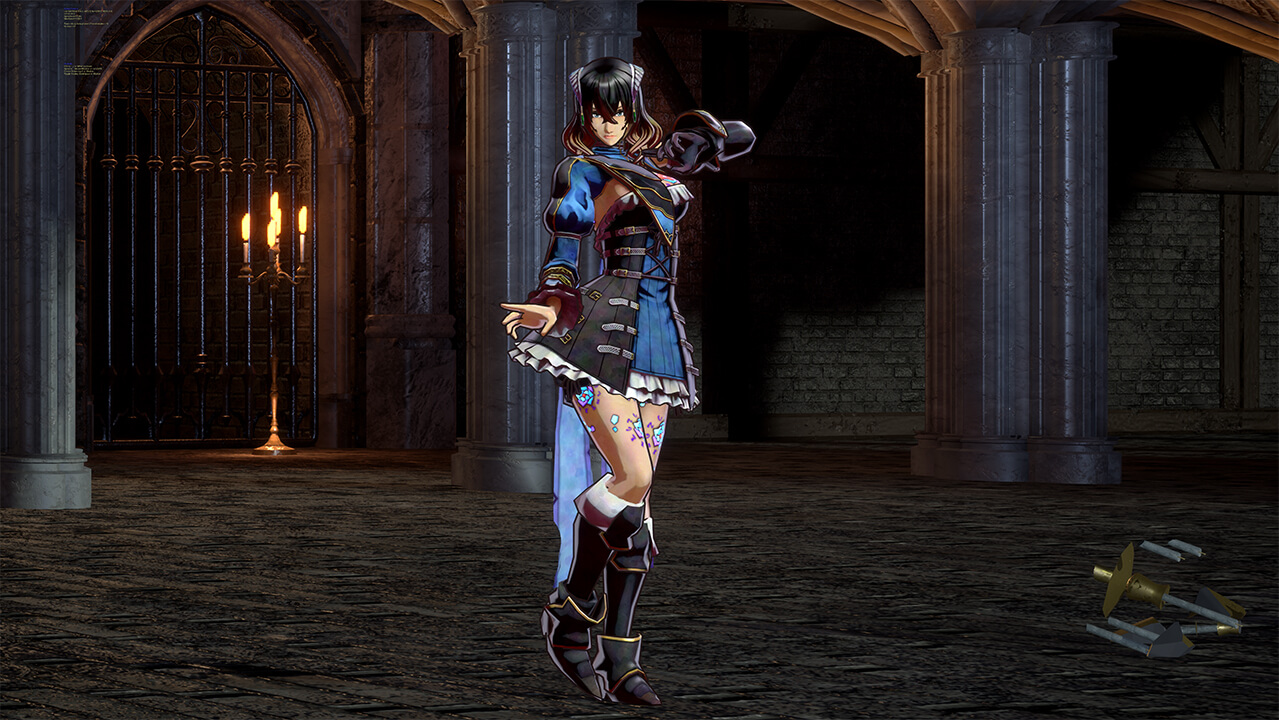 "You can never really go back to the past but Koji Igarashi’s latest vision does feel like coming home."

Some weapons like the katana even have certain special moves. Though I’m not sure if using quarter-circle directional commands is the best way to go about it, the learning required to master them is a nice touch. The two boss encounters also felt fun and appropriately challenging, forcing you to learn their patterns and attacks rather than charging blindly into battle.

At the end of the day, I’m left more optimistic about the potential of Bloodstained: Ritual of the Night than anything else. If you’re a hardcore Castlevania fan, Bloodstained doesn’t exactly reinvent the wheel. However, it does embody the formula while telling its own unique story and introducing various new layers and mechanics. That gorgeous blood moon in the background at one point only invigorates the urge to explore further.

Maybe the nostalgia being channelled is its greatest strength. Maybe it’s the great art direction or strong combat coupled with the level design. Whatever it may be, even if you’ve been completely burnt out on the Metroidvania genre and all the top-tier releases it’s seen in the past few years, Bloodstained is worth keeping an eye on. You can never really go back to the past but Koji Igarashi’s latest vision does feel like coming home.