Thomas Puha says it won’t be a long wait for those playing on other systems.

Remedy Entertainment’s next title, Control, is coming out later this year. The game promises a more complex game system than previous titles the company has worked thanks to an open-ended ‘metroidvania’ style. Control has also found itself in the midst of several exclusivity deals, though. The game has several exclusive pieces of content between digital and physical orders (you can get more details in the charts below), while its PC version will only be available on the Epic Games Store for a timed exclusive deal. And on the console side, the game’s two expansions will be timed exclusives for the PS4 version of the game. For how long, we don’t know, but the company promises it won’t be too much of a wait.

Speaking with Wccftech, Remedy’s Communications Director Thomas Puha was asked about the timed exclusivity of the expansions. While he said he could not disclose the actual time frame, he promised that Xbox One and PC users wouldn’t have to wait too long to play the expansions. He also seems to imply the decision was not up to the Remedy Entertainment as much as it was the game’s publisher, 505 Games.

“So there’s one exclusive mission in the digital deluxe PS4 version, and then the expansion pass is kind of tied to that,” he said. “But outside of that, one costume, the side mission, and the digital themes, the game is the same on all platforms, and all the expansion pass will be available on all platforms, but I can’t say what the exclusivity window is, except it’s not very long. So, again, we’re consumers as well at Remedy and the core game is the same for everybody. Again, many publisher and business reasons for doing certain things.”

How long “not very long” ends up being, we’ll just have to wait and see. Control launches on August 27th for PlayStation 4, Xbox One, and PC. 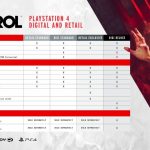