A satisfying romp through hell.

If you’re thinking of playing 2016’s mind-blowing demonic shooter Doom for the first time, the Nintendo Switch is certainly not the way to play it. In attempting to port the game over to a decidedly less powerful system, id Software and Panic Button have made several significant sacrifices to the game’s technical prowess and performance, so the consoles and PC still remain the definitive way to the play the game. If, however, you’re simply looking to dive back into this adrenaline-fuelled romp through hell, or if you don’t have access to any other version of the game, Doom on the Nintendo Switch is perfectly capable of showcasing just why this game was one of the best releases of 2016.

Let’s get the most major talking point out of the way right off the bat- the visual downgrade. On the Switch, Doom runs at a consistent and solid frame rate of 30 FPS, and it remains locked at that in both handheld mode and console mode. There are occasions during both, the multiplayer and the single player when the frame rate dips a little, especially at times when the on-screen action becomes too hectic, and while these aren’t minuscule enough to not be noticeable, they’re also not jarring enough to affect the moment-to-moment gameplay in any real way.

To keep the frame rate steady, id Software and Panic Button have chosen instead to sacrifice a little bit in the resolution department. Whether you’re playing it docked or undocked, Doom on the Switch is rendered at a dynamic resolution that is capped at 720p. As you can imagine, that’s a pretty noticeable jump backwards from the game’s original 2016 launch for consoles and PC. Though at first glance the fiery and demonic landscapes of the game look really good, it’s when you get up close to some of the geometry or the character models that you start noticing the blemishes. The textures look a little washed out in comparison to the 2016 release, and there just isn’t as much visual detail in the game. 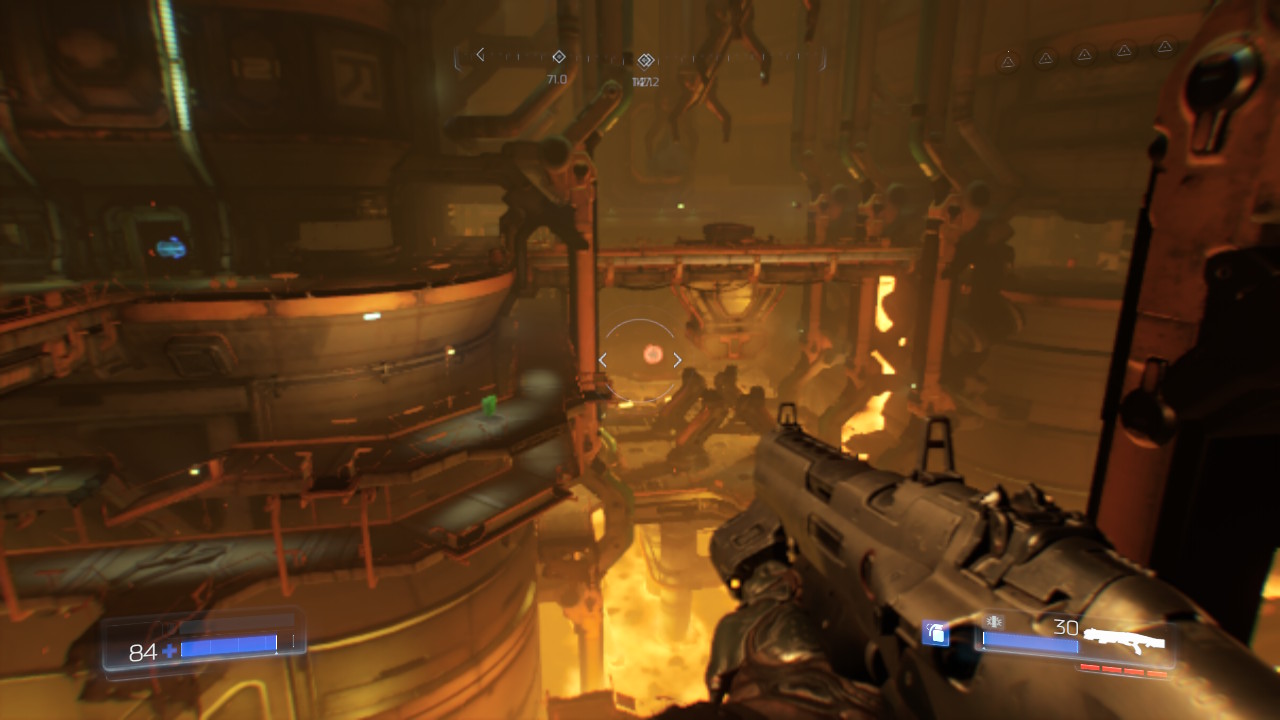 "Doom on the Nintendo Switch is perfectly capable of showcasing just why this game was one of the best releases of 2016."

But here’s the thing- much has been said about how Doom doesn’t look good on the Switch. To be fair to the game, though, that’s not necessarily true. Admittedly, the game looks significantly worse than it does on the PS4, Xbox One or PC, which is to be expected, given the fact that the Switch isn’t even close to being a powerhouse like those three are. Simply viewed in absolute terms, though, Doom on Switch is a pretty good looking game. It is, in fact, the best looking handheld shooter I’ve ever played. And while its low resolution settings do stand out every now and then, the game makes excellent use of motion blur, which mostly compensates for a lot of these issues.

When you’re playing a game like Doom, though, the visuals shouldn’t really matter all that much, and thanks to the game’s inherently fast-paced and brutal combat, they don’t. The moment you pick up that shotgun and feast your eyes upon the fiery hellscapes of the game, everything feels right in the world. The pumping metal music is always blaring in the background, cheering you onwards as you mow down monsters and demons with a large and varied arsenal of weapons, not to mention some pretty graphic and satisfying melee kills.

It should be noted, though, that the Switch’s inherently smaller screen and analog sticks make controlling the game feel much less organic than you’d want from a twitch-based first-person shooter such as Doom. Admittedly, it’s not too much of an issue- it’s nothing that breaks the game or hampers your experience in any significant way. That said, you’ll probably be best served if you tweak the sensitivity settings of the analog sticks to suit yourself. Once I manually adjusted those settings, I was able to experience a much more fluid and entertaining shooter than what the game really is on default settings. 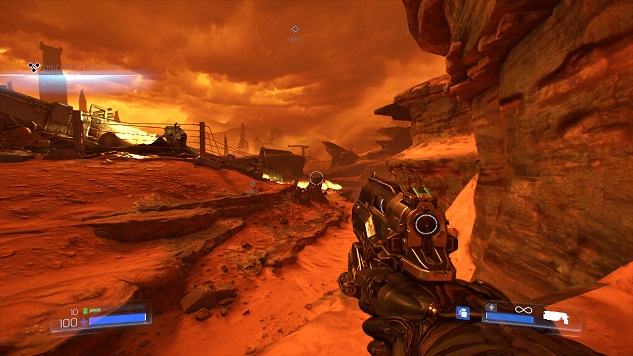 "The moment you pick up that shotgun and feast your eyes upon the fiery hellscapes of the game, everything feels right in the world."

The essence of the experience remains intact, then. Doom on the Nintendo Switch has the same strengths and weaknesses in terms of gameplay that its console brethren do. As such, it is every bit as ghastly and enjoyable as it should be, and when you’re tearing through hordes of demons and spattering the screen and the environments with blood and bits, the visuals stop mattering. On the flipside, just as the campaign in the 2016 release had the tendency to become a little repetitive every now and then, so too does the Switch version.

Thankfully, that is easily remedied. Outside of the campaign, Doom has plenty to offer. It’s a shame that the SnapMap mode hasn’t been made available to Switch owners, especially considering the fact that the system’s very nature makes it kind of perfect for such creation tools. However, outside of this noticeable omission, there’s a lot of content on offer here. The multiplayer mode is surprisingly well done on the Switch, especially given the system’s general lack of awareness and progression in the online space. Logging into lobbies is quick and easy, and matchmaking is generally done well too, while the multiplayer matches themselves are as much of a blast as you’d expect them to be.

It’s not in the multiplayer that you’ll be spending the bulk of your time, though- it’s the Arcade mode that steals the show. Right from the get go, players are given access to all the maps and weapons in the game, while the addition of score boosters and multipliers adds an extra layer of accessibility and arcade-y fun to the experience. The Arcade mode is a great option if you’re looking for bite-sized pick-up-and-play experiences, and the added bonus of online leaderboards and the inherent hook of speed-running make it even more of a blast. 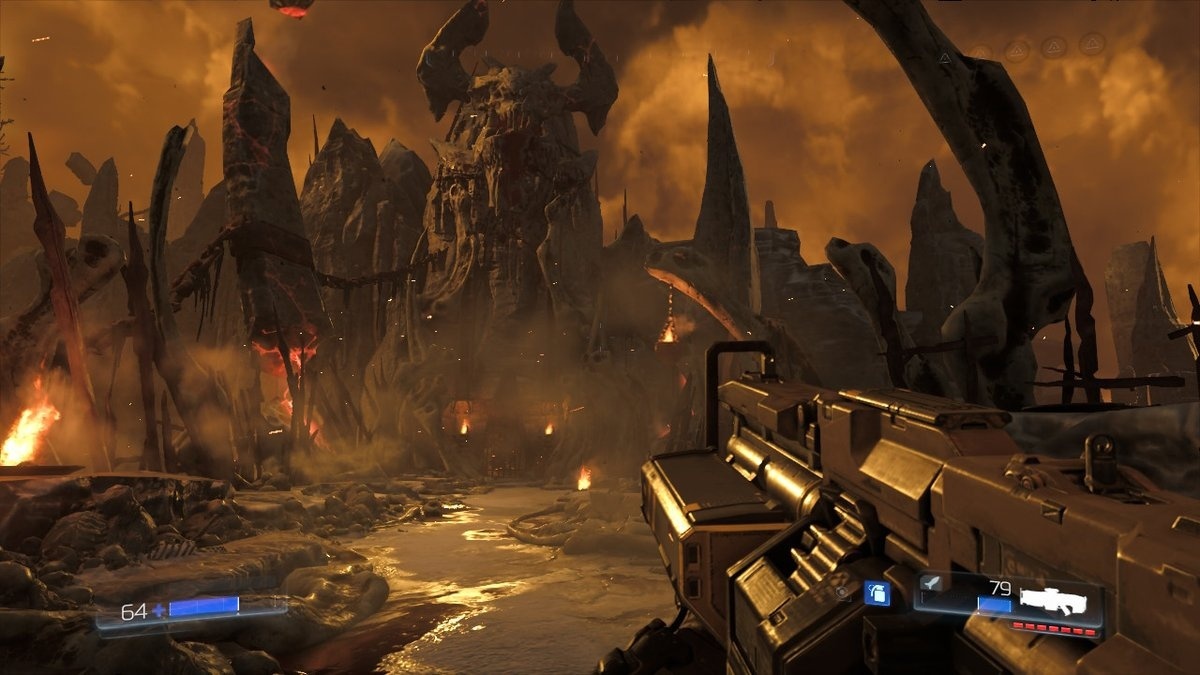 "The Arcade mode is a great option if you’re looking for bite-sized pick-up-and-play experiences, and the added bonus of online leaderboards and the inherent hook of speed-running make it even more of a blast."

It’s a shame that a lot of the times, the game’s user interface lets it down, actually hampering your overall experience. The UI is the exact same as it was in 2016 release, and that’s exactly why it’s an issue. It’s not really a problem when you’re playing the game in console mode, but when your Switch is undocked, the font size and on-screen prompts are ridiculously tiny, and all too easily missable, especially during moments when the on-screen action is getting too hectic or chaotic (and as you can imagine, such moments are very frequent in Doom). It’s quite surprising, since this is an issue that could and should have been fixed quite easily while the game was being ported. Here’s hoping patches in the future actually do something about it.

It’s only such minor issues that all come together to collectively hold back Doom on the Switch from the same greatness that its 2016 release reached with such ease. As a port, id Software and Panic Button should definitely have done a little more work to optimize the game for the Switch, but outside of such niggling issues, Doom is every bit as bombastic and viscerally enjoyable as I wanted it to be. It offers up plenty of content, features the same brand of chaotic and frenzied combat, and once you’re able to look past some admittedly significant issues, it’s an absolute blast.

The campaign can become a little repetitive at times; Sensitivity issues in the controls need to be manually tweaked for an optimal experience; Noticeably downgraded visuals; Occasional frame rate drops; UI needs major reworking in handheld mode; No SnapMap.

Final Verdict:
GOOD
This may not be the definitive way to play this instant classic, but Doom on the Switch manages to capture the violent and rampaging essence of the experience very well.
A copy of this game was provided by Developer/Publisher/Distributor/PR Agency for review purposes. Click here to know more about our Reviews Policy.