The highly anticipated remake could end up launching on Microsoft's console as well.

In spite of being in the final stretch of its active life, the PS4 has still got a great many upcoming exclusives to look forward to- among all those, Final Fantasy 7 Remake is perhaps the most highly anticipated (which is saying something, considering all the other exclusives that are coming to the system). But there’s a chance that it doesn’t end up remaining a PS4 exclusive after all.

Square Enix have spoken in the past about the possibility of the game seeing a cross-gen release, but even in the current generation, it might end up coming to the Xbox One. Recently, the official Xbox Germany Facebook page put up a post mentioning Final Fantasy 7 Remake as coming to the Xbox One next year. Interestingly enough, it mentions the same release date as its PS4 launch- which, in all likelihood, is a mistake, since we know the game is supposed to be at least a timed exclusive to the PS4. This post, in any case, has since been deleted, though you can see a screenshot below (via ResetEra).

There’s every chance that the post itself was a mistake and doesn’t mean anything, but seeing as Final Fantasy has been a multiplatform series for a while now, an Xbox One release for the upcoming remake shouldn’t completely be out of question.

Final Fantasy 7 Remake launches for the PS4 – at the very least – on March 3, 2020. If you want FF7 on the Xbox One, you can always just play the original, if nothing else. 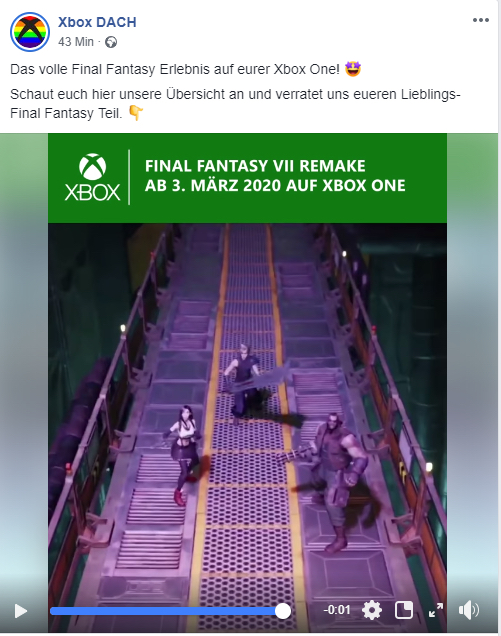