Square goes all out for the collector's edition.

Final Fantasy 7 Remake is finally dated, coming at the beginning of next year, after a very long road since its initial reveal in 2015.  Of course, like any major release nowadays, the game will have multiple editions to chose from, in the form of a Deluxe and Collector’s Edition.

The game will, obviously, come with a standard edition that will come with the first episode of Final Fantasy 7 Remake, and everyone who preorders will get the Chocobo Chick Summon Materia. It will also receive a Deluxe Edition that includes a hardback art book, mini-soundtrack CD, Cactuar Summon Materia and Sephiroth Steelbook Case (the Digital Deluxe version will have digital versions of the soundtrack and art book).

The Collector’s Edition has all of the above, a Carbuncle Summon Materia and a Play Arts Kai Cloud Strife and Hardy Daytona figure. You can see it below (the Deluxe Edition is also highlighted in it). You can check your local retailers for listings and prices.

Final Fantasy 7 Remake will release March 3, 2020 for PlayStation 4. You can check out the E3 gameplay here. 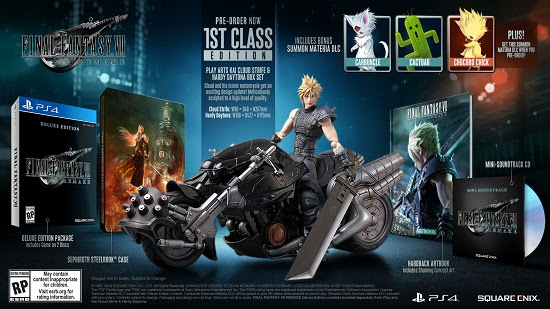