Fans will have to wait a little longer for Nomura's epic.

When Square Enix re-revealed its oft-delayed Final Fantasy Versus XIII, re-branded as Final Fantasy XV, and even threw in Kingdom Hearts III as a bonus, there was some optimism that we’d finally be seeing these games release after all the waiting. However, though both games are confirmed for Xbox One and PS4, a recent financial results briefing session on November 6th revealed that Square Enix won’t be releasing either game before March 2014 end.

The games that are planned include Final Fantasy X/X-2 HD Remaster, Lightning Returns: Final Fantasy XIII and Thief. Japanese releases include Call of Duty: Ghosts and Diablo 3. Check out a screenshot of the release schedule below. 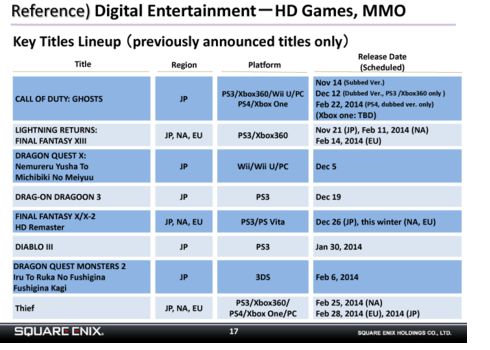 It’s not like Square Enix didn’t say we’d have to wait. At the very least, we’re getting enough information on the combat systems and overall mechanics of both titles. And plans often change, but it doesn’t seem likely that Square Enix will release Kingdom Hearts III and Final Fantasy XV by early 2014, sad as it sounds.