An AMD Ryzen 7 or Intel i7 Skylake will be needed for Ideal performance.

More information on Gears 5, The Coalition’s hotly anticipated sequel in the Gears of War franchise, was promised after E3 2019. This month will see more information on Versus mode revealed, but there will also be a tech test for Xbox One and PC players. It starts on July 19th and runs until 22nd, and then again from July 26th to 29th.

What can PC players expect in terms of requirements though? The Coalition released a handy comparison image for specifications on AMD and Nvidia systems. Suffice it to say that if you want to run this bad boy on ideal specs, you’ll need and AMD Ryzen 7 or Intel i7 Skylake, an AMD Radeon VII or Nvidia GeForce GTX 2080, 8 GB VRAM, and 16 GB of RAM.

The good news is that Xbox Game Pass subscribers on both PC and console (along with Xbox Game Pass Ultimate users) will receive access. The tech test can be pre-loaded on July 17th, with more details coming next week during the ELEAGUE Invitational. Stay tuned in the meantime.

Gears 5 will release on September 10th for Xbox One and Windows 10 PC. Xbox Game Pass Ultimate subscribers and Ultimate Edition owners can start playing on September 7th though. 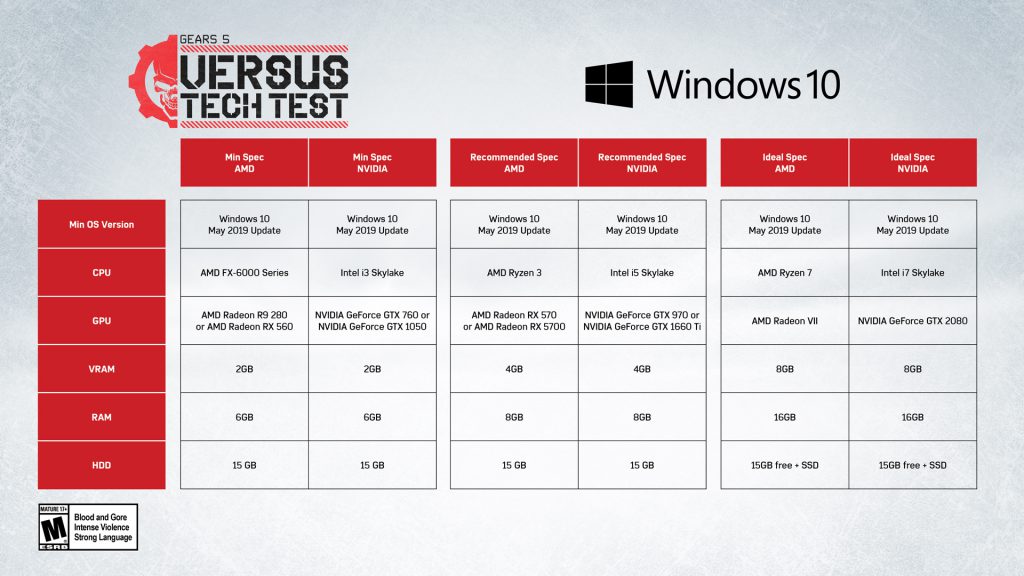