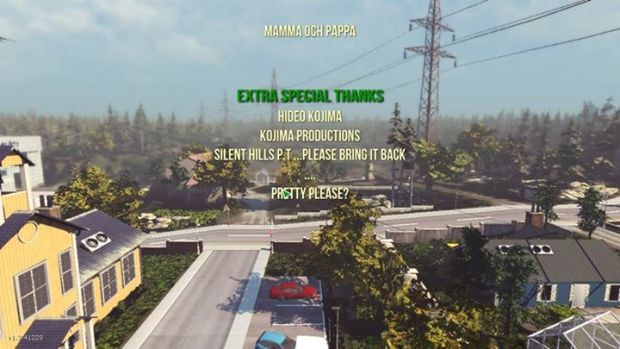 Coffee Stain Studios has always had a weird sense of humour, especially when you factor in the developer’s non-sensical and oddball Goat Simulator franchise. The game has had its share of poking fun at pop-culture and even released a new update called GoatZ, mimicking the popular DayZ franchise.

However, one of the odder references made by the indie dev was to Metal Gear Solid 5 director Hideo Kojima, who is listed under the “Special Thanks” section. Silent Hills is also featured with Coffee Stain saying “Please bring it back. Pretty please?”

The dev noted on its Facebook page that, “We heard that Hideo Kojima was removed from the credits for Metal Gear Solid V so we added him to the credits for Goat Simulator.”

It hasn’t been confirmed if Konami actually removed Kojima’s name from the credits but it has been striking his name off of promotional material left and right. The publisher also dissolved Kojima Productions in Japan and cancelled development of Silent Hills.

Still, at least Coffee Stain is open to hiring Kojima when he (allegedly) leaves Konami. Thoughts on this? Let us know in the comments.