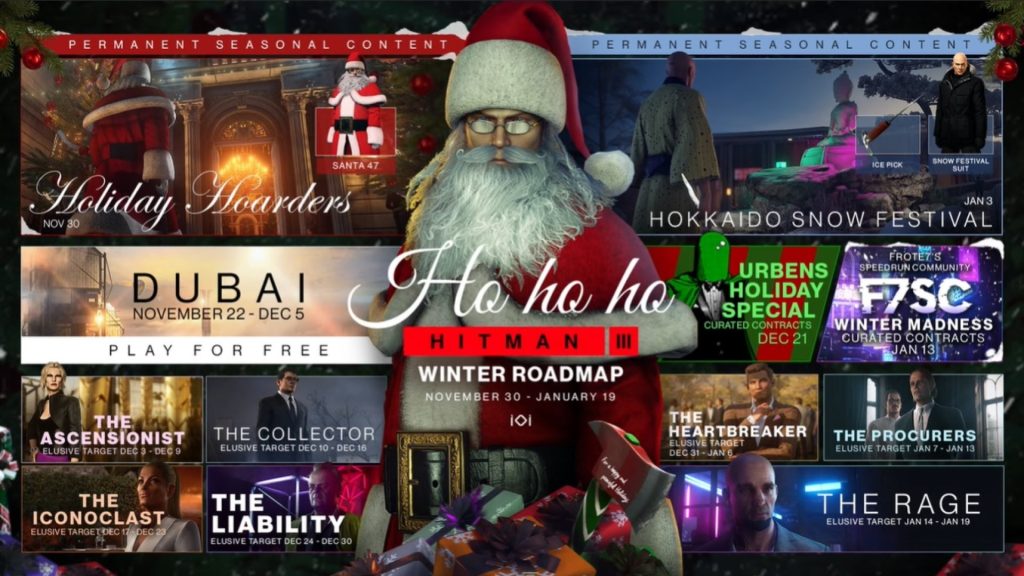 2021 was an excellent year for Hitman and IO Interactive, not just because Hitman 3 was as good as it was, but also because IO Interactive went on to follow up on its launch with extensive post-launch content in the form of the Seven Deadly Sins seasonal content. Now that that’s wrapped up, the developer has plans to keep on supporting the game with more new content all throughout 2022– but before that, the next few weeks are going to be bringing some winter-themed content to the stealth title as well.

That content has now been detailed in a winter roadmap trailer released by IO Interactive. Two pieces of permanent seasonal content will be added to the game with Holiday Hoarders (which kicks off today) and Hokkaido Snow Festival (which kicks off on January 3), both of which collectively will also add two new suits and a new tool.

Meanwhile, at regular intervals from December 3 up until January 19, Hitman 3 will also be bringing back all of its previous Elusive Contracts. The Dubai level is also going to be playable for free up until December 5, while there will also be several new curated contracts.

Finally, IO Interactive also reiterates that in early 2022, it will be sharing more details on the new stories, maps, and other content that will be added to the game throughout its second year, so keep an eye out for that as well.

Hitman 3 is available on PS5, Xbox Series X/S, PS4, Xbox One, PC, Stadia, and as a cloud-exclusive release on the Nintendo Switch.