Three different tribes inhabit the Forbidden West, each with their own mannerisms, behavior, culture and roles within different settlements. 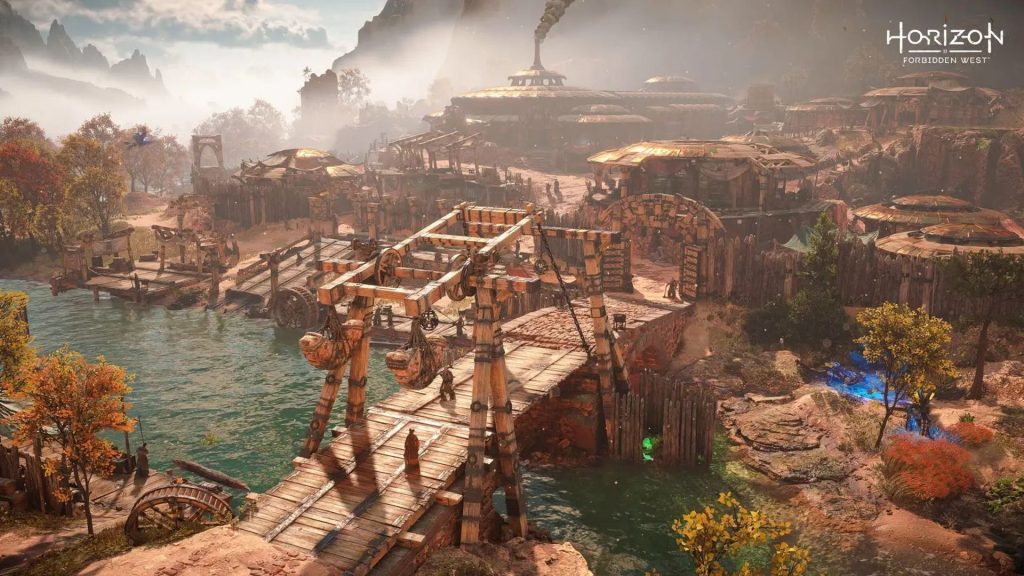 Guerrilla Games has a new PlayStation Blog post for Horizon Forbidden West, discussing the world design, how non-combat NPCs are more realistic and much more. Senior writer Annie Kitain says that, “At the start of a project, we put a lot of thought into every tribe we’re going to encounter. What their conflicts are, how they fit into the story, and how they interact with the world around them. Take the Tenakth, for instance. Many of their beliefs are influenced by the ancient ruins of the Forbidden West, and unlike other tribes, they’re comprised of three distinct clans. Their shared history, convictions, disputes – all of that is important to developing the characters that Aloy will meet on her journey.”

This time around, non-combat NPCs are part of a “crowd system.” As lead living world designer Espen Sogn notes, “Within that system, you can create rules such as reactions, walking paths, and other animations. We then also have the attitude system, which determines a personality. This means we can create unique people who behave like individuals within the world. We are constantly adding layers of authenticity within the world through animations and behaviors. When members of a tribe are in their settlement, their safe spaces, they can act like themselves.”

There are three main tribes – the Oseram, a “social and historically patriarchal tribe, so their animations are more about shoulder punches and high fives”; the Utaru who are more laid back and will sit down to mingle together (along with being “a bit more touchy-feely”; and the Tenakth, who put up a decidedly stronger front. “As the player moves around, these are potential subconscious hints that will help you visualize where in the world you are.

“All of this happens within the game’s narrative framework. You should be able to identify from a distance which tribe you’re looking at. The way that different tribes hold or transport water: the strong Tenakth will carry it on their shoulders; the peaceful Utaru will hug it closely; and the crafty Oseram will carry it with their hands.”

Settlements are also key on one’s journey. Take Chainscrape, an Oseram settlement located on the border. It’s fairly busy, offers “abundant natural resources and opportunities for adventure and risk” and even has a bar where Aloy will interact with new characters.

“With so much activity, so many visual cues, Chainscrape was a place where we could demonstrate many new systems and animations that make the world and its people feel much more alive. In Horizon Zero Dawn, there were a lot of assets and things in the background. In Horizon Forbidden West, they’re not just textures: they’ve been elevated into actual objects that are being used by people in-game.

“Where you previously saw a person standing in front of a forge, they will now actively engage with what’s around them: moving materials, leaning on walls, drinking from cups, talking to friends, and just living their daily lives. They move and exist with purpose,” said Espen.

The Settlements are key to upgrading one’s gear and offer different weapons and outfits. Senior designer Steven Lumpkin states that, “We wanted the towns and villages across the Forbidden West to feel lived in, vibrant, and useful. In each settlement across the world, you’ll find opportunities for adventure. They are filled with merchants and vendors: Stitchers, who can sell Aloy powerful (and beautiful!) new outfits in exchange for shards and machine parts; Hunters, who offer an array of tactical new weaponry; Herbalists, who sell potent potions that Aloy is definitely strong enough to handle; and Cooks, who prepare invigorating meals that Aloy can carry with her for a boost.”

Each tribe’s role is also reinforced – the Oseram Hunter will work as a blacksmith while the Tenakth Hunter is in the quartermaster role. “You’ll see this reflected in the individual characters, as well. There’s an Oseram Cook you meet in one of the early settlements who has a buoyant personality and puts a lot of emphasis into how food tastes. Later, you meet a stern Tenakth Cook who mainly focuses on how a well-fed warrior is better prepared for a battle. These differences make them feel like they’re a part of a unique culture,” says Kitain.

Along with her spear, Aloy can carry up to six weapons at a time and they each extra perks. Outfits offer resistance to various damage types along with stacking bonuses for Aloy’s Skills. “With the right outfit boosting the right skills, the sky’s the limit. Plus, you can swap weapons and outfits on the fly, so you can change your approach at any time.”

“The narrative of Horizon and the vibrant cultures that inhabit its world were a huge source of inspiration for Aloy’s outfits. Clothing reflects a unique style, as well as the materials a tribe has access to and knows how to use. Hunters from the Nora tend to favor ranged combat and stealthy hunting. Carja excel at the use of traps and tripwires. The boisterous Oseram love fighting up close and personal with a hammer. The Tenakth and Utaru have their own preferences as well — and the outfits Aloy can acquire from each culture tend to reflect and support these unique approaches to combat.”

Players will utilize Workbenches to strengthen their weapons and outfits. Your requirements may also change depending on what’s needed for an upgrade. “As you travel the Forbidden West, take note of machines that have visible horns, claws, tusks, or tails. While early upgrades may just need a bit of braided wire or sturdy hardplate, if you want extra mod slots, the strongest perks, or the biggest resistances… you’ll want to make sure you shoot off the Tremortusk’s parts before you take it down.” Pretty much every resource, from animals and Machines to plants and Greenshine crystals, can be useful.

Steven notes that, “More advanced upgrades will require resources from specific machines, and Aloy’s Focus can help her scan the machine, identify key resources, and tag them for easy tracking. If you’re ever short on supply, merchants will happily take valuables to sell off your hands. And if you need even more, external machine parts can be harvested and sold for a fair price. A consummate crafter, Aloy can use animal skins and bones to sew new Pouch and Quiver upgrades, letting her carry more ammunition or resources with her in the field. All of these systems reward Aloy for exploring the world even as she travels deeper into the Forbidden West.” This should also sound familiar to those who played Horizon Zero Dawn.

Horizon Forbidden West is out on February 18th 2022 for PS4 and PS5. Stay tuned for more details in the meantime. 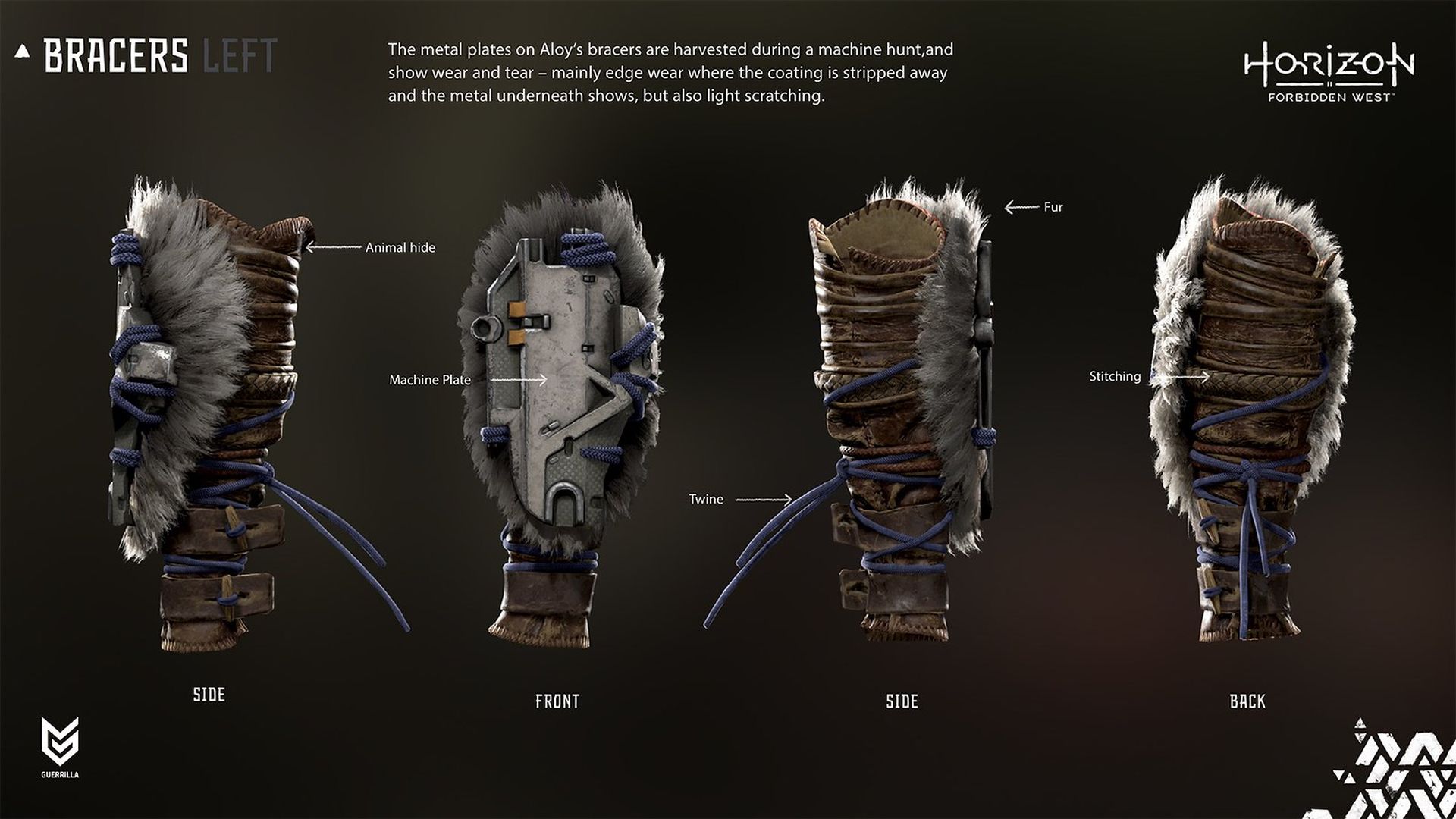