Killer is Dead Features Alice as a Target, Demonic Wonderland

Alice suffers from constant back pain since moving to the moon…yeah. 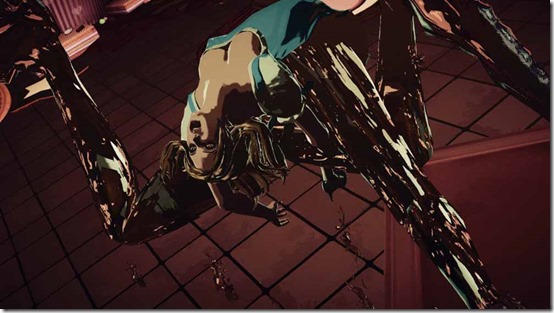 Grasshopper Manufacture’s upcoming Killer is Dead, directed by Goichi Suda or Suda 51, will feature players taking on the role of executioner Mondo Zappa as he dispatches dangerous criminals and assassins using a katana and cybernetic arm.

Interestingly enough, as Siliconera reveals, one of those targets is Alice, and though not explicitly stating it to be Lewis Carroll’s character, you’d find it hard to think otherwise.

This Alice comes from France though, and seems to suffer from back pain (shut up) since moving to the Moon. It begins with a painter named Robert showing Mondo a drawing of a spider creature and he heads off to the house in question to investigate before landing up in a twisted version of Wonderland. Alice is the spider creature, and unlike many of the Mondo Girls isn’t one to fall prey to X-Ray glasses.

Killer is Dead is set to release on August 27th for Xbox 360 and PlayStation 3.