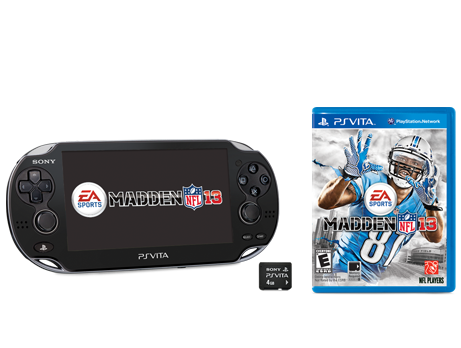 EA Sports has announced Madden NFL 13 and FIFA 13 for the PS Vita, not surprisingly.

The PS Vita version of FIFA 13, much like FIFA 12, will use the touch screen controls of the system.

EA Sports has also announced a Madden NFL 13 + PS Vita bundle. The bundle will release along with the game, and will include a PS Vita Wi-Fi System, a copy of Madden NFL 13 and a 4GB Memory Card.

EA officially unveiled Madden NFL 13 and FIFA 13 at their press conference earlier today, showing plenty of footage, a few trailers and plenty of features. They also showed off Kinect voice command features for the games. Click through the links to read the full stories.