The card-based combat system "creates a different tension, but it's not nearly as stressful, I think, as XCOM," says director Jake Solomon. 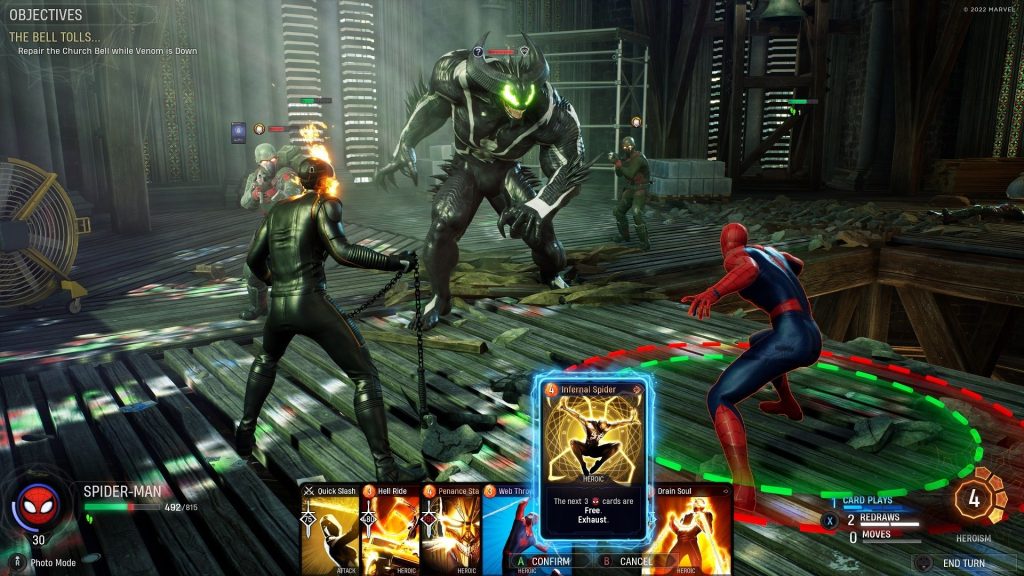 Following its new trailer and the reveal of Spider-Man at the Summer Game Fest, Marvel’s Midnight Suns is receiving tons of new details and previews from various outlets. The “love it or hate it” card-based gameplay is still intact but interestingly, Firaxis tried having things closer to XCOM.

In GameSpot’s preview, director Jake Solomon said that the team tried having the same percentage-based chances for attacks. In XCOM, even at higher percentages, attacks can miss. Even if they hit, a target could be Grazed and receive less damage. This “felt terrible” with the superhero fantasy that Marvel’s Midnight Suns was going for.

“At that time, we realized, as we kept putting randomness in the abilities of heroes, it felt terrible. It just felt terrible.” As a result, the developer opted for randomizing hero abilities with each turn to maintain some element of unpredictability. Along with knocking enemies into the environment for extra damage, you could accidentally hit another character and hurt them as well. Then there are “Quick” attacks which give an additional card if an enemy is killed. Heroism builds up over time and is necessary for stronger cards (or more environmental attack options).

Solomon notes, “It creates a different tension, but it’s not nearly as stressful, I think, as XCOM… People will think this is sacrilege, but if anybody can say this, I can: I think it’s a more fun puzzle to solve. Because what doesn’t happen is flat-out doing something wrong, and almost secretly wrong.

“In Midnight Suns, it’s almost impossible to do something wrong. Attacks do what they say they’re going to do. They’re always going to damage the enemy. They’re always going to do the amount of damage they say they’re going to do. It becomes a case of, the real way, the real trick to the puzzle is, how well am I going to solve this? It’s still easily as complex as any match of XCOM, but it becomes more about like, how well can you win this match? How quickly can you beat this match? How many guys can you take out with one ability? And so it’s just as mentally consuming, you feel that same sense of victory.”

Time will tell how this approach pans out in the full game so stay tuned. Those who really miss XCOM shouldn’t worry – Solomon recently said that the series is “definitely not dead.” As for Marvel’s Midnight Suns, it’s slated to release on October 7th for Xbox One, Xbox Series X/S, PS4, PS5 and PC with the Nintendo Switch version coming later.