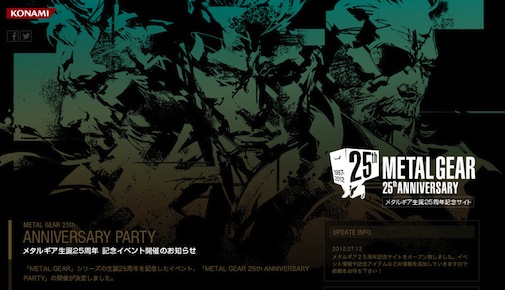 Like the rest of the world and it’s dog, we’re quite convinced that something is going down on the 25th Anniversary of Metal Gear this August.

With that in mind, the official Metal Gear 25th Anniversary site has been opened by Konami. There’s no mysterious countdown or timer or cryptic messages floating about. It only mentions the party taking place. And it’s very much a real event, though by invitation-only (sorry, stalkers).

That being said, fans will be able to enter a drawing for a slot at the party.

There are also links to the various Metal Gear games and anniversary product, which is available through Konami Style. You can also find information regarding the new MGS4 re-release’s trophy support and data install features.

Yes, this only serves to make us more suspicious of a blockbuster announcement.

Nonetheless, it’s been 25 years since Snake first snuck into our lives, and it’ll be a hell of a party come August 30th.